One of the stars of the US craft brewing scene is Brooklyn Brewery. The two co-founders and the brewmaster have also written separate books about beer and brewing that are pretty significant in the craft brewing industry. Brooklyn Brewery started in 1988 and they make 6 standards and a number of regular seasonals. Illiards has tried the Brooklyn Pilsner in Brooklyn, whilst I had the squintingly good Brooklyn East India Pale in Beijing. I hadn’t expected to see a Brooklyn Brown Ale in a Wynyard bottle-shop, however and I snapped up a couple for the journey home.

We are experiencing the hottest April spell on record in Sydney at the moment, and the Harbour was the place to drink this wonderful brown ale. This is a seriously good beer – and I’ll be back to get a six-pack. It was a really rich chocolate malt beauty, with a great bittered finish. We followed up with a Vale DRK – one of my favourites – and it compared reall, really well.

After really only having Budweiser, Millers and occasionally Sam Adams, there has been a real invasion of US beers of late. Victory, Sierra Nevada, Brooklyn and Magic Hat are big US craft brewing names and then there’s RJ King’s Wingwalker range. THe most impressive feature of the two varieties I had was the label work. THere’s a real Norman Rockwell quality to them. That’s where the quality ends. I’m not sure what the problem is, because everything reads and looks right, but both beers were just underwhelming. There was nothing unpleasant, but both the Pale and the Belgian Witbier were thin. Shame – they look great. 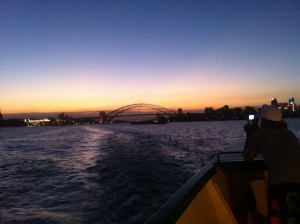 Just another evening on the BotF