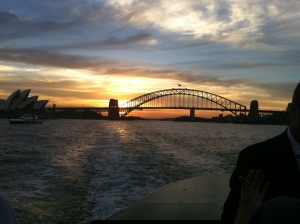 Not too bad for an 80 year old

Daylight saving finished on the weekend, and we’ve abruptly moved to a new skyline on the Back of the Ferry. It is amazing what a difference an hour makes. Tonight’s ferry trip was looking pretty lonely with an alomst empty deck one minute to departure time. As the ferry pulled out, suddenly there was more than a quorum and Sydney Harbour proceeded to turn on a great sunset.

Now, most of the crew on the Back of the Ferry have been doing this journey for many years. Maybe it’s been awhile since the sunset trip, but the lads were like tourists all of a sudden. iPhones, Samsungs and even Crackberries were pulled out to capture the most wonderful skyline of pinks and blues that changed with every minute. The moment we made the turn at Bradley Head the sun was perfectly framed by the Coathanger and it really looked like a flameball had landed in the bridge. The sunset lasted the full half hour and even as we pulled into Manly Wharf there was still burning pink in the sky – a magnificent start to the twilight months.

Tonight’s totally unrelated beer review comes from Alsace. I always think of quiche when I hear about Alsace, because for some reason I think about history lessons and Alsace-Lorraine.It gets hazy after that. Not sure where I found this, but the bottle and cap are cool. Must admit I thought it was Spanish, but it is definitely French. Meteor “Biere Blonde de Qualitie” is blonde lager, which has the appearance of another Euro Swill. It’s actually a real malt bomb and has a flavour that lingers for some time. If Sydney’s autumn summer persists, a case of this wouldn’t go astray. They can truly trace their unbroken origins to 1640, which is pretty impressive and claim to be independent 368 years later – pretty impressive. According to the website, in 1961 – there were 21 independent breweries in Alsace – today Brasserie-Meteor remains the only one. 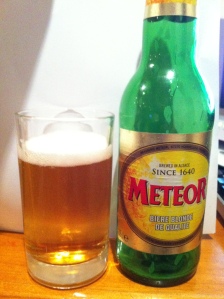