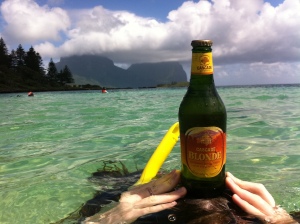 BotF had to bring some new beers with him to drink on LHI, not being sure what would be available. Turned out to be a good move, though one surprise popped up later in the week. I’m pretty sure that Cascade Blonde is a relatively new addition to the Cascade line-up. Can’t help thinking that Cascade’s confusing the issue with the name here. If you look at the back label, and indeed the website, you are drinking a wheat beer, and that is what it tasted like. Perhaps the Cascade marketers felt more people would try it if it was labelled “Blonde” instead of “Wheat”. It is definitely a Wheat Beer – and a pretty decent one as well.

I drank it on Old Settlement Beach, which is a great place to be with or without a beer. This beach is so picturesque. No buildings can be seen on the beach, only a dune, some fields and then forest. A sanctuary is up one end, where a wonderful reef containing (when we went) sting rays, wrasse, double heads, clownfish etc can be found. The end where the kids go as safely as anywhere is famous for its frequent visits of turtles. Every time we went we saw at least one turtle, and you swim along side them. Phenomenal. My photo-assistant daughter tried to capture a photo of the Cascade with a turtle, but was unsuccessful.