The brewery and tasting area

Around now, there’s a couple of birthdays for high profile craft brewers. 4 Pines turns 9 and Two Birds turns 6. Both laudable achievements to be sure in an industry that is showing a few signs of growing pains. (Check out this article from Crafty Pint on Brewcult and this article from Australian Brews News on Rocks Brewing). On the weekend, I visited a veteran of the industry that has quietly racked up 14 years of existence – Hunter Beer Co. 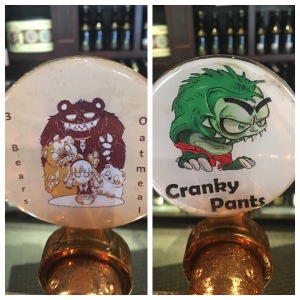 A couple of seasonals

For the last 14 years and the last 10 under Head Brewer, Keith “The Beer Guy” Grice, Hunter Beer Co. has been pumping out a surprising number of seasonals along with their regular range. Keith was manning the taps on the day I visited, spotted my growler and ambled over for a natter. Very friendly chap and a fount of knowledge of all things Hunter Valley and Hunter brewing related. In fact all the Brewers multi-task and will pull beers as well as have a chat to you about them. There’s plenty of space in the tasting room, as well as outside. Tours of the brewery are offered as well. Hunter Beer Co is part of the Hunter Valley Beer Trail and open 10 – 5, seven days a week.

Tasting Room and a very big slab of timber

The taps offer the five beers in HBC’s regular range as well as at least 5 taps serving seasonals. HBC produces a staggering number of seasonals for such a (relatively) small space. I mentioned to a Keith that @untappd had 115 beers listed. “Not even close. We do about 32 seasonals a year – and we are much older than Untappd”. (Which for the record launched in October 2010). They’ll put some of these in 750ml champagne bottles, which requires an extra big bottletop. Some of the seasonals come out annually, like the Slaked Magpie, which is bloody good vanilla porter (I now have one in the fridge).

The other seasonal Keith was very keen on was “Black Gold”. This is a recreation of the 1975 version of Hunter Old, when Tooheys used to have regional breweries. Back in day, some pubs only served Tooheys Old and Tooheys new. It was the first beer I drank (for the record – 5 November 1984. A massive surprise when I received a schooner of lack stuff!).  Up until the early 2000s it remained my go to beer. Black Gold certainly brought back memories – and whilst the Hefe and IPA were both good beers, I had to go with the Black Gold for my growler fill.