The pinnacle ﻿of this hit and run trip to China was always going to be Harbin and its legendary Ice Festival. So far it hasn’t disappointed and even though we haven’t hit the Ice Sculptures yet (that’s tonight), we’ve already had a blast. 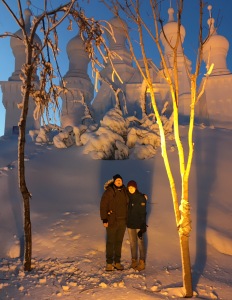 In amongst crossing the iced over Songhua River twice, seeing the most spectacular snow sculptures, walking the cobblestoned streets and enjoying our best feed on tour, we also squeezed in a unique and unexpected beer experience.

My daughter spotted the “Madieer Restaurant and Brewery” sign down a side street off Century Avenue. We entered a beer world like no other. No sooner had we grabbed a seat at the bar and gotten over the shock of the cultural mismatch of the waiters uniforms when the “Baltic” dancing start. Two very tall blonde ladies in “traditional” costumes starting twirling and doseydoing to some lively folk music. Now I’m no expert, but I reckon the routine had been worked out in a youth hostel the night before. The cowboy clad male staff whooped and hollered, whilst the dirndl clad females looked suitably unimpressed. 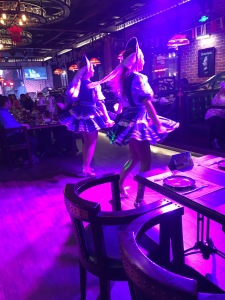 I ordered a sampling rack, which took its time because the barman insisting on filling a 3 litre communal vessel in one pull. A Pilsner, a Wheat, an IPA and a Porter were presented in different glasses. The Porter was a real standout – solid body with good chocolate and coffee notes coming through.

As I was sipping my tasters, a Caucasian girl dressed in a shimmering silver skirt and an older Chinese man had an intense conversation in front of my daughter, who relayed that the discussion was on song choice. Music soon began and “Shimmering Silver” was joined on stage by two gents competently playing a guitar and bass. The first tune was an instrumental and “Shimmering Silver” shaked a maraca and showed as much interest as one of the models in a Robert Palmer video. She sang in the next and wove her way through a rather disinterested audience. In the meantime, “Older China” stood at the back staring daggers. It was like we were at an audition. Two songs later (sung by the guitarist) it was all over. Another intense conversation commenced up the back. A sizeable crowd of Chinese patrons were oblivious to all this and were concentrating on mowing their way through as many 3l containers of Pilsner. “Older China” (presumably the owner) should have been happy.

“Please, I am nuclear physics student”

Just as we were about to leave, our two folk dancers reappeared this time transformed into very untraditional Vegas showgirls. They climbed on to the stage and threw their very long limbs about in some vaguely choreographed dance. Crowd didn’t care and went nuts. Afterwards the dancers were accosted by female patrons for their photos, which the dancers seemed rather uncomfortable about.

Dropped some coin on this joint

All in all it was a very odd experience. The beer hall’s been going about a year. The beer is brewed onsite in very traditional looking copper brewing equipment that Germans love using in Paulaner brewpubs, which are prolific in China. They’ve got some seasonals, which I might sneak in tonight.