On the surface, Shenyang is a big, hard and grimy Chinese City. Add snow and minus 5 degrees Celsius, and you wonder why you’re here. But pull on your thermals and have a plan – and Shenyang can be plenty of fun. It even threw up some surprises.

For history buffs, Shenyang offers plenty. The Qing dynasty started here, it has tombs and an Imperial Palace like Beijing. The Japanese really got stuck into the Chinese here, and arguably the war between 1931 and 1945 started here on 18 September 1931. I’m not a museum frequenter, but the 9 18 museum is a belter and gives a glimpse into the enmity the Chinese have for the Japanese. The largest wholesale market in North East China (including Beijing) sells everything from hardware to clothes to jade sculptures to fabrics and is extremely chaotic. Zhongshan Square features (allegedly) China’s largest sculpture of Mao. There’s a vibrant Korea Town nearby and that’s where we headed in search of a feed. 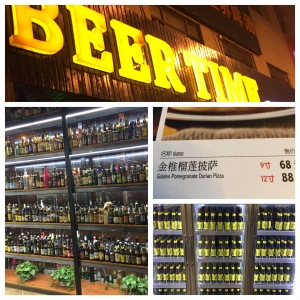 Fortuitously, on our way, I spotted a neon sign proclaiming “Beer Time”. We ducked in to very new and very well stocked bar. Beer Time’s fridges and shelves groaned under the weight of beer from everywhere, but predominant Europe. The kitchen was pumping out pizzas including one with “Golden Pomegranate Durian” topping. A crowd of Chinese blokes had gathered in their Man U jumpers to watch the FA Cup. A place that warrants further investigation.

After a great cheap Korean feed, we headed to the target for the evening – the Fat Dragon Alehouse. I had high hopes and every single one was surpassed. Caleb is a wonderful host and packs an amazing amount of beer pleasure in a small space. Burgers are available – but I was focussed on the beer. Most of his 12 taps featured Chinese brewed beer and he had 5 on from a Chengdu brewer. Our old mate from Devolution was represented with their IPA and Panda Brew also featured. My daughter and I met a couple of US Marines and had a great old time. The merch is solid and I am very proud of my t-shirt, which states “Confucius says Wise Men drink Craft Beer”. The Fat Dragon Alehouse must be on the itinerary for any visit to Shenyang.