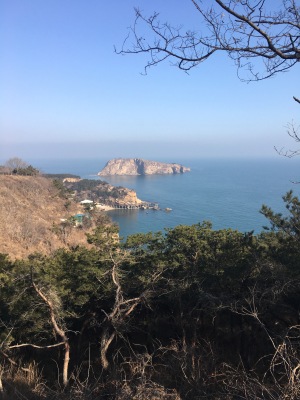 Long story short, there’s a few Sinophiles in my family – my brother, my daughter and me. They’re travelling in China so I thought I’d pop over and join them for a little while. My trip is centred around the Ice Festival in Harbin, but before and after, we’ll be knocking off a few Chinese metropoli. First stop, Dalian.Despite this being winter, and winter in Dongbei (North Eastern China) gets bloody cold, we arrived to a balmy 8 degree, hazily sunny day. In summer, Dalian teems with Chinese tourists that pack its beaches. These beaches aren’t a patch on Manly, but for a Chinese, Dalian is the French Riviera. A highlight is a drive along Binhai Lu, which is a coast road that soars along cliffs giving panoramic views and wraps behind the beaches, which are becoming increasingly surrounded by resorts and apartments. Along the road, is the world’s longest boardwalk at 32km. Maybe I’ll do that the next time I visit. 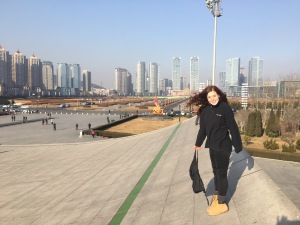 The other thing for which Dalian is famous is the world’s largest public square – Xinghai Square (more an elongated oval). In winter, nothing is in bloom, but at the moment the centre is shrouded in builder’s cape. The centrepiece used to feature the world’s largest huabiao statue, but the authorities tore it down at 3am one morning, much to the locals chagrin. Not sure why, they are features of Tianenmen Square in Beijing.

Dalian is also home to an elusive craft brewer – Devolution Brewing. A great internet reference for anyone wanting to embark on a China trip and drink beer after the sightseeing has been done is a Great Hop Forward. I emailed the author before I left with my itinerary and he mentioned Devolution Brewing. Devolution’s web presence is miniscule – even on WeChat and Baidu – and my only tip for a place to find it came from Untappd. I found the Brooklyn Bar (which looks like a great little pizza joint), where it was last served, but it was shut. Undeterred, my daughter, fluent in Mandarin, knocked on the door and got us in. The cook pulled us a decent IPA, but couldn’t be convinced to part with a glass (even for RMB). I wasn’t going to push my luck for a second (plus there’s a venue in Shenyang that may serve it). Mission accomplished – Dalian made craft beer drunk in Dalian. 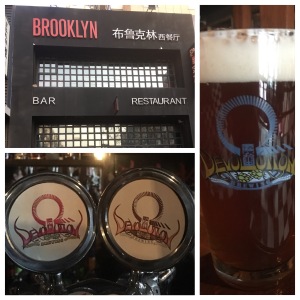 We squeezed in a visit to another good venue for beer drinkers in Dalian. Strollers is a classic dive bar, which is in the shadows of Hotel Nikko. They have a solid range of European and US bottled beer, and VB. They also serve Dalian Dry (made by Snow) and a range of Panda Brew, a craft brewer from Beijing. 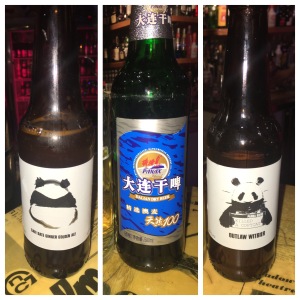 Now I lived as an expat in Beijing for 8 months in 2009 and bar hopping was a favourite past time. An occupational hazard was that you got used to heavy passive smoking – particularly in bars like Strollers. My last visit to Beijing and Shanghai made me think that this practice was well on the way to being eradicated. This hasn’t reached Dalian. After 20 minutes in Strollers, my daughter was looking for an oxygen mask and the atmosphere was thicker than inside Cheech and Chong’s Kombie. We experienced similar in a wonderful seafood restaurant (Dalian’s specialty) – but they at least had exhaust fans. 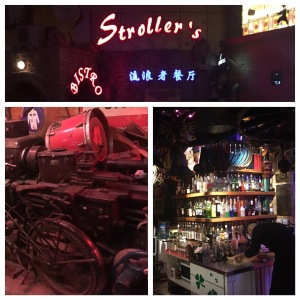