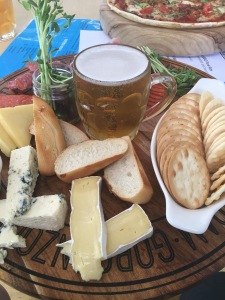 Back in January 2010, this correspondent paid a visit to Murray’s Brewing Co at Bob’s Farm.  Seven years on and the opportunity presented itself again. Lucky I got in early, because New Year’s Day saw the place bursting at the seams.﻿ 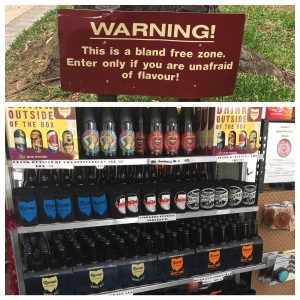 Murray’s Brewery is right next to a vineyard and there’s plenty of room for the kids to roam.  A shipping container has been converted in to the bar and there’s at least 10 taps pouring everyone from an East Coast Draught to a range of Berliner Weisses and plenty in between. I sat right next to the bar enjoying my substantial plate of nibbles and at time the queue was 10 deep. East Coast Draught was the most requested, but many punters were trying the Melon Rouge.

I had a lash at the Blood Moon IPA. Murray’s has consistently pumped out great IPAs. This iteration which features the addition of blood oranges adds to the list.  Great colour and a squintingly™ good finish. (Three days later in Melbourne I tried the Pulped Fiction Blood Orange IPA by Mountain Goat and Murray’s won). The Melon Rouge is a wheat beer with Watermelon added. Plenty of fruit beers this summer – and this one’s fine. Not overwhelmingly watermelon.

Some things have changed from 7 years ago – new logo, new bar etc – but some things remain constant. Seven years ago I met Murray, this visit – there was Murray, pulling beers, moving tables and generally directing things. He is a legend of the Australian beer scene. The merch is plentiful and there’s plenty of takeaway options. Not sure if every day is as packed as New Years Day, but my verdict from 7 years ago holds – worth a visit.