Much to Missus Bladdamasta’s chagrin, I have been known to be an early adopter. Sometimes this has been very costly (the first Kia Carnival comes to mind. An early blue tooth key board for an iPad etc). 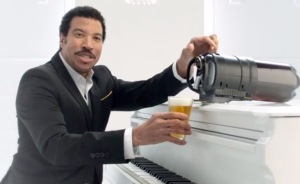 i wonder how many Tap Kings Lionel has?

When I first heard about Tap King, the gimmickiness appealed and I came close to mindlessly buying.  Porters at Balgowlah got ’em in early, but I don’t think I ever got a decent beer pulled from one. The Lionel Ritchie ad was brilliant, but I resisted. I think by that stage I already had about 5 growlers – and could fill them with beer that I wanted to drink as opposed to Lion product.

Beer and Brewer today has advised that the Tap King has been discontinued. Dodged a bullet there. Did anyone out there buy one?