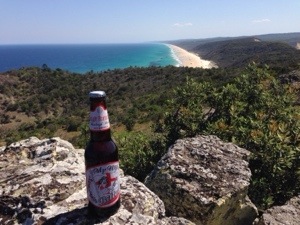 With some time on my hands I went for a walk around the Point and discovered a track to Double Island Point’s lighthouse that was only 1.1km long. Grabbing a stubbie of My Wife’s Bitter and two companions I took on the ascent. It’s a pretty easy walk. I was expecting a much steeper climb and the only issue was the scalding sand. (No thongs on this trip). The rewards at the top are stunning. The view south along Teewah Beach is equal to the view south of Cape Byron. Looking northwest, you gain yet another perspective of Rainbow Beach and the Coloured cliffs. It’s just got to be done if you make it to Double Island Point.

In addition to the lighthouse, there are a couple of houses on a well manicured lawn, which can’t seen as the pleb bushwalker is told to “keep out – Private”. I did some research and discovered one of the great scams which is otherwise known as the Noosa Parks Association (NPA). This excellent article in the Courier Mail (no – not an oxymoron), explains how a bunch of “greenies” have exclusive access to the cabins for 20 years. Now if I was a member of the NPA, I’d be pretty pleased with how I’ve manipulated the political system to gain cut price access to an amazing coastal residence. You have to do a couple of hours of weeding a day, but surely the public should be able to rent these cabins as well. SCAM.

To satisfy the inner Beer Grills in me, I consumed a stubbie of My Wife’s Bitter upon completing the ascent. This beer has featured on Back of the Ferry before, but when it was 650ml “bit on the side”. It is now available in 6 packs of stubbies and has been the only craft beer I’ve found in the Gympie district. It’s a nice beer though after sitting in a pocket in my boardies for the walk up this particular instance was a little warm. Aah at least it was wet. The photo below shows the Rainbow beach Hotel’s take on craft beer.