On a recent work trip to Perth managed to visit the port of Fremantle. Fremantle is roughly 45 minutes by cab from the Perth CBD. 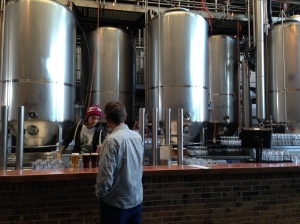 The first port of call was the Little Creatures brewery which is situated on Fremantle Harbour. We sat out the back of the brewery in what could be described as beer garden on the water’s edge.  Interestingly there were a number of patrons in the beer garden where a large sandpit kept a number of small children entertained whilst

their parents could have a quiet couple of beers. We had a great view of a variety of yachts and all type’s of boats coming and going from the harbour, the beer of choice for me was pale ale, my colleagues (Rob and Yardy) opted for the Pilsner and the Rogers. All beers where of excellent quality and a trip to the brewery is one of

highlights of a trip to Perth.

We walked a short distance to Freo’s cosmopolitan “Cappacino Strip”. This area is full of restaurants, bars and as the name would suggest cafes. We visited a microbrewer called the Monk Brewery and Kitchen. A great variety of beers, the Kolsch beer was very good, Yardy and Rob both tried out the tasting trays – the Chief was strongest at 6%, but Yardy preferred the Kolsch. Interestingly we were asked not to stand and drink beers at our tables as the Monk is licenced as a restaurant (apparently you should not stand). Good place, friendly staff, good beers on the main strip in Freo and a place to watch the world go by.

We flew home to Sydney on Friday and with it being the last weekend of the month, it was Harbord Bowlo Fishing Comp for me. Not the best time of the year for fishing, the water still has to warm up a bit and the weather and sea conditions were less than ideal (onshore winds with a reasonable sea bump). Fished Dee Why beach on Saturday and Sunday mornings to catch 15+ whiting of which 3 were legal (over 27cms) and 1 bream. Flogged Curly beach from 10pm to 2am Saturday without getting a single bite. (Un)fortunately most other anglers also struggled.