Mexican beer outside a Mexican bar in Manly

Not for one moment will this BotF correspondent pretend to be an expert on things Mexican. I have, however, been fortunate enough to briefly visit a small portion of a country in which I would like to spend a far greater slab of time. In three days me and my companions managed to enjoy bars in Rosarito, Ensenada and Peurto Neuvo – all of which are in Baja and only a couple hours south of Tijuana. So, whilst I won’t be able to make an expert assessment of the offerings of the latest groovy addition to the ever burgeoning Manly bar scene – I can at least affirm whether it has an authentic Mexican feel.

Chica Bonita (which may mean “pretty girl”) has been cleverly wedged into a narrow shop at the end of a small arcade that runs off the Corso. Despite its relatively hidden location, this Mexican bar and restaurant couldn’t pump its lunchtime burritos, beers and cocktails quick enough on a Saturday afternoon. Like most small bars/cafes/restaurants plenty of effort has been put into the furniture and wall art – and some may regard the fit out as kitsch, I reckon they’ve nailed it. Memories of a wonderful afternoon at an Ensenada bar called La Palapaloca came flooding back and a quick persual of the photos of that visit confirm, that Chica Bonita really provides a genuine Baja experience. The display bowl of beers in limes is a classic example. 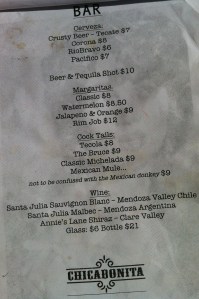 A sensational touch for mine is giving diners the option of having their burrito served in a lettuce bowl. My slow pulled pork was wonderfully sweet, but my daughter’s tangy chicken was the winner. I’ll be back for a repeat visit really quickly and I’ll be giving the “Classic Mechelada” a lash. Apparently it is a beer cocktail. They’ve done well sourcing the Mexican Beer. I haven’t seen tins of Corona in Australia before.

I’ve drunk plenty of Mexicali – but surprisingly it’s never graced these pages. Mexicali is the name of border city in Mexico that is on the other side of the US town called Calexico. This beer isn’t made in Mexicali, but rather the neighbouring border town of Tecate. Doesn’t matter where it is made – it is a bland mexican beer.Negra Modelo is made by the same company thats makes Corona and Pacifico. It’s distinctive feature is the gold foil top on the squat bottle. Instantly recognisable bottle, but indistinguishable beer. Not the worst, but don’t seek it out.