Great view (of the beach not the beer)

For as long as this correspondent has been drinking in Manly, I’ve always given The New Brighton Hotel (aka the NBH) a wide berth. Even in the 80s, when the original Hotel Manly was around – it was anywhere but the NBH. I don’t know if it was any rougher than anywhere else in Manly or why I picked up a vibe back then not to go there – but it’s always been one of the last places I’d go for a beer. I think that’ll change now. 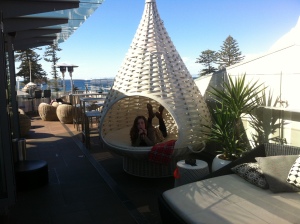 The owners of the NBH have recently dropped a small fortune on a renovation that deserves to be seen. There are now “4 Designer Levels”, including a public bar with plenty of windows that open onto to the Corso, the Shark Bar “the entertainment destination of the Northern Beaches” and the highlight – the Rooftop Bar. I’ve been to the Rooftop Bar twice now, and it really is a sensational addition to Manly’s drinking options. I can’t recall having ever seen a gas firepit like the one gracing the Rooftop in a pub in Sydney (or anywhere for that matter). I also can’t recall seeing blankets being made available to patrons to entice them out onto the rooftop in winter. I definitely can’t recall seeing Tagine shaped couches (also with blankets) on a rooftop before.

The view is also spectacular and easily the highest view from a pub in Manly – well and truly higher that the view from the Moonshine Bar, which is on top of the neighbouring Steyne hotel. You can see all the way over to Cabbage Tree Point or Fairy Bower and there are plenty of glass screens to keep as much of the wind out as possible. This isn’t the best rooftop bar I’ve been to in Sydney (the Glenmore Hotel has that distinction – and I’m looking forward to the results of that reno), but it is a killer view and the furniture is pretty awesome (including the couches that really look like double beds).

View of NBH from the beach

One certainly doesn’t go to the NBH for a novel beer experience. In fact, the tap rack has an equal number of ciders to beer – and I’m reliably informed the Blackcurrant Bulmers is one to avoid. There is at least a variety of 4 Pines on tap in the public bar, and Coopers Pale Ale is prevalent on all floors. So whilst there is a photo of Hahn Premium Light above, that won’t be reviewed and we’ll turn our attention to the attractively packaged Sierra Nevada Southern Hemisphere Harvest Fresh Hop Ale, which was lurking in my fridge . Website hyperbole describes the great trouble that Sierra Nevada goes to to produce this beer. Hops are flown in from New Zealand (Pacific Hallertau, New Zealand Motueka and New Zealand Southern Cross hops) to be used when they are at their freshest. I’m not sure how many years that this has been made, but this is the 2012 version. It pours a rich amber colour and looks great next to a beautifully decorated bottle. Maybe because Sierra Nevada always produces very sharp beers when it’s highlighting hop presence, I was expecting something a little bigger. This is a well balanced beer – nice malt flavours, with a mild bitterness and the 6.7% alcohol is not that evident. It’s very easily quaffable, but it is just a little underwhelming (possibly unfairly).