This correspondent has had the privilege of lapping up some amazing weather in tropical QLD over the past week – namely on Hamilton Island. With temperatures in the low 20’s and glorious sunshine, it’s an ideal place to escape the Sydney winter without needing a passport. The facilities and level of customer service on the island have been unbelievable. 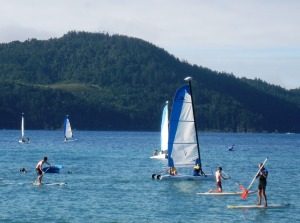 I have learnt a valuable lesson for future island trips though: BYO craft and/or unique beers. The only options on the island are the standard commercial beers, which is fair enough for a tourist destination I guess.

The highlight of the week without a doubt was the full day sailing trip around the Whitsundays which included snorkeling off Chalkies Beach, chill out time at the sensational Whitehaven Beach, and cocktails on the return leg to the Hamilton Island marina. Not a bad way to spend a day.

Our sail was probably not quite the same as the original discovery of the Whitsunday Islands by Captain Cook on HMS Endeavour some 250 years ago. To put Cook’s discovery into perspective, archaeologists have found evidence that Aborigines of the Ngaro tribe settled in the region around 8,000 years ago…..Wow!

The tour was operated by Cruise Indigo and the boat called On The Edge. In fact, I have granted exclusive kiwisinoz.com.au membership to On The Edge – the skipper explained that the boat operated in NZ’s Bay of Islands for 17 years before coming across the Tasman. It has joined the throngs of Kiwis now calling Australia home (and the Aussies have claimed it…..sorry – I couldn’t resist!).

The only dark moment was when the skipper announced the drinks list on board. The only beers were VB and XXXX Gold. At that point I was close to jumping over board and swimming back to shore to pick up a six pack of anything else. However I stayed on board and scratched down a couple of XXXX Gold – I can now claim to have done my bit for the QLD economy.

A huge thanks to the brilliant crew aboard On The Edge, Josh, Stewie and Rochelle. A great day out and highly recommended!

Chilling out On The Edge after a hard day’s sailing and snorkeling.