This reviewer had never heard of it…but then again outside of those lagers available in oversized tins back in the lazy cicada humming summers of the 70’s in far flung locales such as Eastwood, Top Ryde (why top?) and El Rancho this reviewer was not exposed to the delights of the more sophisticate ’boutique’ brews of the outer world till latter years. Much like the young lad in this photo his impressions of the fine craft of brewing distilled in his formative years will take on their own dimensions. History will judge but it would be a cultural loss, UNAUSTRALIAN, and not as Darwin intended if todays youth in their latter years recall the rite of beverage as miniature 330ml faux nancy lagers. Unlike the tight shorted 500ml behemoth tins of the 70’s replete with fake chill icing the label, downed by men with mighty mows. Sadly such tins are now only found in toy-stores – there purpose reduced to money-box.

As the title to this blog attests, this brew proudly declares itself to be ‘The famous beer of Mauritius’. My first reaction was to locate Mauritius. What standing did this suburb have on the world to declare its fame? Could you get the bus from Eastwood?

Mauritius is one of those Indian paradises that everyone has had a turn at conquering, exploiting and forgetting. You know the story…first the Arabs, then the Portugese…Dutch, French and finally her Majesty…now she rules herself. It was under her Majestys rule that the Phoenix brewery set history in motion…1964.

Whilst the lad pictured expresses displeasure at this toff, i have to say that he had not the pleasure of its nectar. I’m not going to attempt to categorise this brew….and neither does itself…i assume its a lager, certainly not an ale, perhaps a pilsener..it is merely a ‘beer’. And as a beer it refreshes. Whilst it may be a paltry 330 ml, it evokes memories of those 500ml behemoths that truly refreshed. Resches, KB, Carlton Draft….ahhhh those days are fading as have those once mighty brews – swallowed by the giants of the brewing world…support your local boutique lager to ensure gene diversity into the future.

Not the perfect beer but i can well imagine sitting on the poop deck of 5 crewed motor launch in the channel off Tamarin Bay, Mauritius….its 6pm and the sun is easing to the horizon….shoulders weary, a film of salt….the end of another day of great surf and an esky full of Phoenix to toast your mates and commemorate another great day in Paradise. 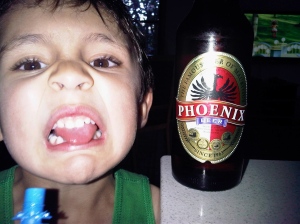