When I told some Sydney-siders that I was going to have a beer at Mrs Parma’s there was no shortage of school boy sniggers. Mrs Palmers is a cheeky Australian company that sells surf wax based on an unashamedly single entendre theme. Their wax apparently offers the best grip around, her 5 daughters offers something extra sticky – you get the picture. They also offer a fine range of “witty” t-shirts. That said, Mrs Parma’s website offers a logo that wouldn’t be out of place on a Mrs Palmers t-shirt.

Anyway, enough of the Benny Hill discussions – why was BotF at Mrs Parma’s? Our old mate Tipples (@Tipplesblog) was recently announced as the “Blog of the Month” on “The Crafty Pint“, and BotF was there to celebrate a well-deserved accolade. When in Melbourne, the best thing one can do is to cop a tip from Tipples and, as always, he came through. Mrs Parma’s is an awesome place with two very simple themes 1) the only beer it serves is Victorian Micro (presumably Carlton Draught was micro once – I quibble) and 2) They specialise in the Art of Parmology. Check out the photo for an example of Parma versatility. 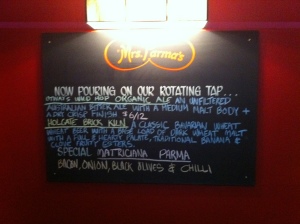 The specials - beer and parma

Now Tipples takes notes far more contemporaneously than me (ie he takes notes as he drinks) and therefore his recollections of what we drank and how they were are more accurate than mine. I can confirm, however, through backoftheferry’s Untappd account that we imbibed the following:
– Mornington Brown from the Mornington Peninsula Brewery (@mpbrew);
– Wild Hop Ale from the Otway Estate Winery & Brewery (@PricklyMoses);
– Hatlifter Stout from the Grand Ridge Brewery;
– Doss Blockos Pale Lager (@DossBlockos)from the East 9th Brewing Co;
– American Pale Ale from Arctic Fox; and
– Gippsland Gold from the Grand Ridge Brewery. 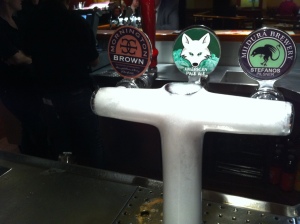 Now 5 of the 6 beers were available on tap, and these 5 tap beers ranged from good to stellar (Hatlifter Stout being droolingly so) – but I haven’t perfected an appropriate beerporn method for a tap beer so I won’t go chapter and verse into them. Unfotunately the beer that was in a bottle and therefore was captured digitally was the worst of the lot – Doss Blockos. Tipples has very adequately expressed a view with which I concur – marketing has won out over brewing – but seriously this is a wank of the highest order. Take the opening line from an online Melbourne sub-culture newsletter “There are a host of amazing Victorian Micro Brews doing the rounds and for the most part they are outstanding products. But one thing most have in common is a backyard mentality to label design and marketing.” That’s right, the problem with all these outstanding brewers is that they concentrate on brewing and not on the labelling. Well – thank heavens for that. Otherwise, we’d be drinking bilge like this. I tried to watch the video of three street artists talking about the concept, but words fail me. 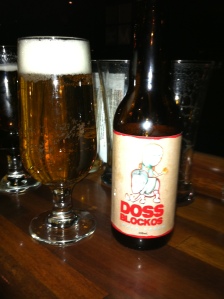 Words don’t fail these blokes however and their beer label hyperbole is some of the funniest I’ve read. “Doss Blockos has been stripped bare of anything but the essential taste we could ream from the specialty pale malt and cascade hops that we have always used.” I could be wrong, but I don’t think that reaming and brewing should be in the same sentence. I’ve felt reamed after walking away from a retailer that has robbed me blind, and I felt the same after handing over hard earneds and receiving this in return. Honestly.