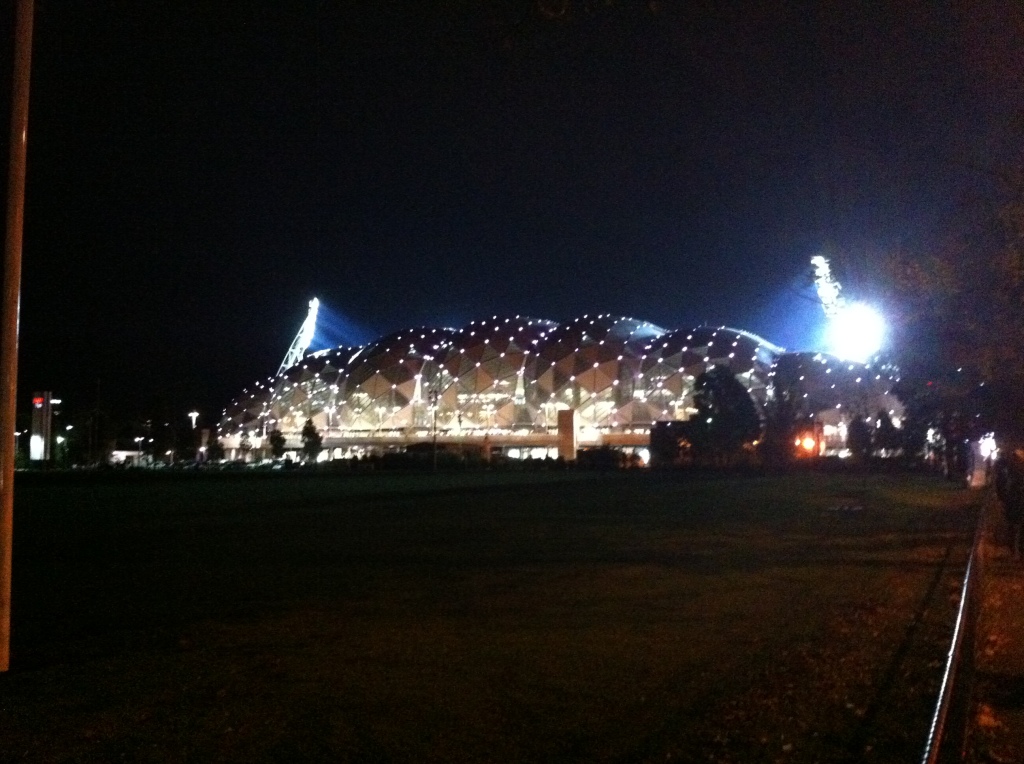 AAMI Park - all lit up

This correspondent had the good fortune to be in Melbourne on a Friday night and took the opportunity to visit Melbourne’s newest football venue – AAMI Park. BotF always prefers referring to stadia by their non commercial name, but this instance AAMI Park is this venue’s first name (if you don’t count the accurate yet bland working title “Melbourne Rectangular Stadium”). There are features of the ground unique in Australia including its spectacular external lighting display. The geometrical bubble design looks pretty cool during the day, but takes on a new dimension at night. A light show that constantly changes beckons the crowds from all the pubs around and about.

Unfortunately there is one feature of AAMI Park, similar to grounds in Sydney, that is very disheartening and depressing. Previously on these pages, Illiards has bemoaned the habit of the SCG to serve only VB Gold at the cricket. Now, I can almost sort of understand the need to serve mid-strength at the cricket when the game goes on for so long, but really – mid-strength at the Rugby!?! Appallingly, that is the fate that awaits a footy fan at a Rebels game. This is a game that goes for 2 hours max even with the pre-game hoopla. Even the Americans serve Hoegaarden at the baseball. Rugby spectators are hardly noted for their hooliganism even with a few sherbets under their belt and even with the introduction of a couple of Mungoes to the culture. It is simply unacceptable.

The viewing facilities at AAMI Park are so good and the ground is so close to many good bars for pre and post game libations that are full strength. We visited the Precinct before the game and the Vaucluse after the game passing the extremely packed Corner. The night would have been perfect had AAMI Park served full strength beer. Maybe there’s an opportunity for Sun Light from Mildura to help out here, if they insist on mid-strength, but really – it’s the rugby. We can drink full strength beer and resist the urge to start a Mexican Wave, create a beer cup snake, scream obscenties at women etc. Trust us.

Quick piece of game summary. Rebels never in it, but they never stopped trying. Good level of aggro through out the game and the tackles and contests for the ball on the ground were willing. Quade Cooper is a talent, but do his backline colleagues know what he is doing? Digby Ioane has an X factor (ie gas) that separates him. Hilgendorf is the unluckiest Super 15 player this year. Rebels fans are entertaining to listen to and will stay loyal. Mortlock is a gutsy old trooper. When the rugby is this entertaining, you won’t need to find other things to do to amuse yourself. (Hence can stomach full-strength beer and not need to perform anti-social acts fuelled by boredom and beer).