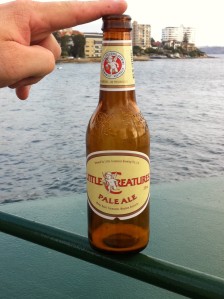 So good I emptied it first

For a mob that pride ourselves on the depth and range of beers we drink and write about, it is a glaring oversight that an orange whip from Little Creatures is yet to appear on these pages.

So I finally managed to get a shot of one (though I’d enjoyed the contents). Little Creatures Pale Ale has been, for awhile, the benchmark for craft beers in Australia. It was only recently dethrowned as Australia’s top craft beer after a 2 year reign at the top (Local Taphouse Hottest 100 Australian Craft Beers).

Little Creatures Pale Ale answers the hype. It’s a brilliant drop. Full bodied with a slightly dusty (pleasant!) aftertaste. This will sound odd but I got a hint of caramel also. If you pour it the head sticks about awhile.