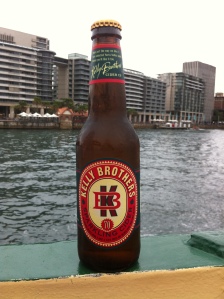 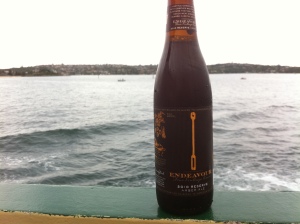 Normal service resumed with BotF making the first journey home for 2011. Good crew tonight with the BotF darts team on board with their tried and true long necks in hand. All the big issues were discussed including the EPL, the Ashes, fishing, the Fast Ferry wars, Perisher in Summer, the 2011 prospects of the 2011 BotF darts team, security guards and Gerry Rafferty. Very sad to hear about Gerry who wrote two of the most enduring songs of the 70’s, including with one of the most highly regarded sax lines – Baker Street.

To celebrate the first 2011 voyage, BotF lashed out and bought a hitherto unseen cider and an often seen but avoided 4 pack of beer.

The cider tab was added some time ago but hasn’t really been populated since Charlie spent time in the West Country. The very attractively packaged Kelly Brothers Cider is from Wonga Park, Victoria and becomes the 6th cider reviewed on the BotF. Charlie had a swig and said words to the effect that for an Australian cider it wasn’t too bad. That is high praise from a West Country man. Its crispness was pleasing and it certainly wasn’t blighted by the sweetness that impacts many ciders. At 7% it also packs a punch.

The dreaded 4 pack came into play again, but fortunately the Endeavour 2010 Reserve Amber Ale does plenty to almost justify the double whammy of 330ml bottles in a 4 pack. (No beer will completely overcome the double whammy of the 330ml and 4 pack). There was also the issue of beer label hyperbole. In the instance of the Endeavour, they claim that “Fresh Rain Water was purified” as part of the concoction. There’s also 3 references to cellaring. Please.

Despite all of this, I recommend getting your hands on some Endeavour 2010 Reserve Amber Ale. This is a fabulous beer. The advertised use of chocolate malted barley is evident with great big sniff before drinking. The taste is phenomenal. Complex, bitter, long-lasting – everything is good about this beer. Great to start the BotF year with such a fine beer.

The one line on a packed lable that resonates – “Great beer is not only determined on where its ingredients come from , but how you enjoy it”. Enjoying this on the BotF helps, but this is a great beer nonetheless. 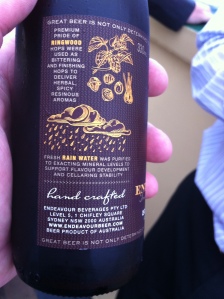 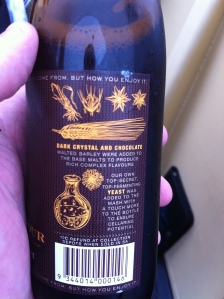 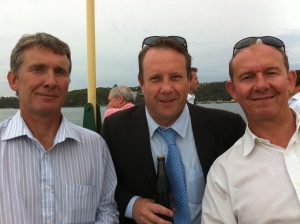 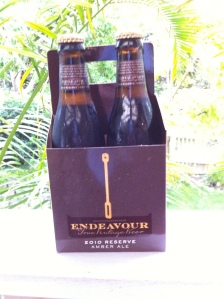