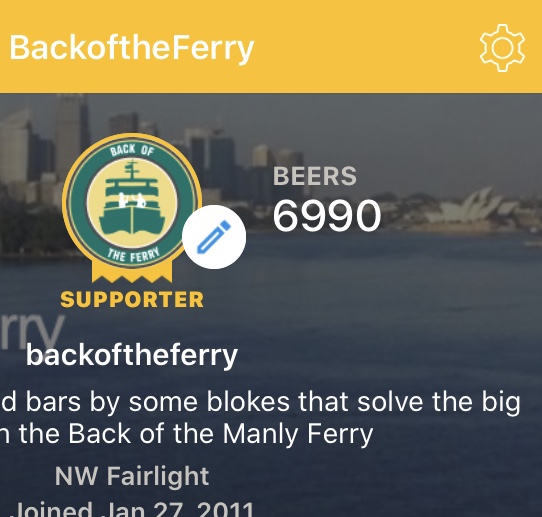 In advance of Back of the Ferry’s 7000th @untappd unique check-in, here’s how it has evolved. @untappd was founded on 20 October 2010. @illiards and @bladdamasta opened the Back of the Ferry @untappd account on 27 January 2011. It is technically a geosocial networking service or a form of Facebook for beer drinkers.

It is an integral part of our beer travels and a very useful history log.

“Betcha haven’t had this one”.

Over the years, we’ve developed a loose series of check-in rules (which are often broken) and created a vocabulary that we share below.

1. always check-in on the Back of the Manly Ferry (not the Fast Ferry, unless rule 2 applies, which is very unlikely)

3. always check-in a unique venue, even if it isn’t a unique beer

#atthesource – drinking at the brewery that makes what you are drinking

Oncer™ – a unique that won’t be drunk again, by the drinker checking in

#Knitsabeervest™– usually applies to a high ABV beer that makes you impervious to cold weather on the Back of the Ferry, but could apply to any cold weather situation

#wedrinkitsoyoudonthaveto™ – a Back of the Ferry community service, that applies to a beer that is so bad – we drunk it, but suggest you don’t. Slightly different to an Oncer™ because the drinker may only have it once, but isn’t necessarily suggesting others don’t

#Worldsbestcommute – not just used when checking in (after all we get the ferry to work), but a reminder of how lucky we are

Triple Bagger – unique beer, from a unique brewery in a unique venue. Often achieved in a foreign land, but occasionally achieved in Australia

#beerglassphemy – we’ve borrowed this term with permission of its creator- Doctor’s Orders Brewing. When a beer is drunk from a glass not related to the brewer

#fortuitous – generally describes that rare moment of unexpectedly stumbling across a brewery or bar. A term occasionally used in jest