Amber – inside and out

An occasional partner in BotF journeys is my good mate (Kiwi) Kieran (as opposed to Manly) Kieran. Such a convert to the delights the BotF offers has Kieran become that he will occasionally stay in Manly as opposed to the city, when he comes up from Melbourne. This time it was my turn to visit Kieran’s home turf – and we unearthed a beauty in Hawthorn. Later in the evening I stumbled across a bottlo, the likes of which I haven’t seen before. 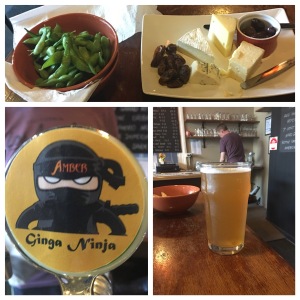 Amber is a delightful little craft beer bar on Burwood Road. There’s three areas to sip a beer – the beer garden, the games room and the front bar. We chose the front bar where we propped up on a table and watched the proprietor go about his work. There are 6 beers on tap and a fridge with a surprising range of bottles given the size of the joint. The owner has brewed a couple of his own drops and one was on tap when we visited. Ginga Ninja is more beer than ginger, and Kieran waxed lyrical about its freshness. There’s a small food menu and I’ve got to say the cheese board was the most generous I’ve encountered. Plenty of crackers too – too often a failing of cheese plates. The tap list was really good and the other stand out was Kettle Green’s American Brown – top beer.  Richard’s a friendly chap and we had a good chat about all things beer. A lovely Melbourne beer experience. 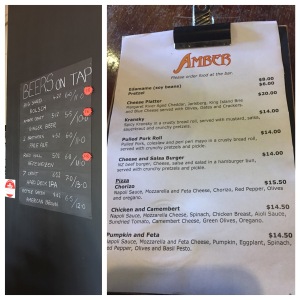 Another only-in-Melbourne drinking experience was to be found as I went for a wander to walk off the slabs of cheese I’d consumed. Burwood Road was pumping as bus loads of Uni students were enjoying O week activities and giving the pubs a solid workout. One place they wouldn’t have invaded was The Small Patch Wine Store.

First and foremost, Small Patch is a bottlo (though “Wine Store” sounds so much classier). And whilst space is at a premium, there’s a fantastic selection of beer and cider (in addition to what I’m sure is a great range of vino). The novel thing about this bottlo (though not for Melbourne) is that you can sit down and have a drink. You can even order in food, and for a corkage fee, have that special bottle of wine with your meal. It feels quite classy and is a fine demonstration of the mature attitude Melbourne has to grog consumption. Worth a visit.