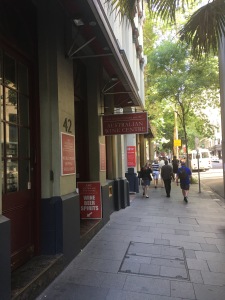 So a quick public service announcement for those that catch the ferry. Whilst Mr Liquor is the most proximate bottlo to Wharf 3, the Australian Wine Centre is always worth a visit if you aren’t rushing. As its name suggests, it is more about grape juice, the A(Wino)C carries an eclectic selection of beer and produce the occasional out there @untappd unique. They’ve just moved from their old location near Goldfields House to 42 Pitt Street.﻿

An example of an occasional unique is Pike’s Tonic Ale. I’ve never seen this beer in any other bottlo. Pike’s Beer Company makes some wonderful beers. I struggle to go past their Pilsener Lager when I see it on a menu. Tonic Ale is highly unusual. It is a very light beer in ABV and colour. This 2%er is flavoured with citrus peel, ginger and coriander and is a cross between a beer and a herbal soft drink. I’ve seen it suggested that it be used as a mixer, particularly gin. Mrs Bladdamasta and daughter number 1 are enthusiastic consumers of G&Ts – so I tried the concept on them. Underwhelmed was the verdict but not unpotable. On its own, though it is a good quencher for a baking day on the Back of the Ferry.