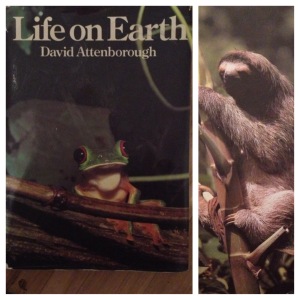 In 1979, Life on Earth by David Attenborough was published. Like many others, I love it, but probably not for an expected reason. I was fascinated by two paragraphs of beautifully dry and exact prose that describes the world’s laziest creature. The facts alone amuse, but it is only at the end that one imagines Attenborough finally cracking it for a grin. I reproduce those paragraphs here.

There are two main kinds of sloth, the two-toed and the three-toed. Of these, the three-toed is considerably the more slothful. It hangs upside down from a branch suspended by hook-like claws at the ends of its long bony arms. It feeds on only one kind of leaf, Cecropia, which happily for the sloth grows in quantity and is easily found. No predators attack the sloth – few indeed can even reach it – and nothing competes with it for the Cecropia. Lulled by this security, it has sunk into an existence that is only just short of complete torpor. It spends eighteen out of twenty-four hours soundly asleep. It pays such little attention to its personal hygiene that green algae grow on its coarse hair and communities of a parasitic moth live at the depths of its coat producing caterpillars which graze on its mouldy hair. Its muscles are such that it is quite incapable of moving at a speed of over one kilometre an hour even over the shortest distances and the swiftest movement it can make is a sweep of its hooked arm. It is virtually dumb and its hearing is so poor that you can let off a gun within inches of it and its only response will be to turn slowly and blink. Even its sense of smell, though it is better than ours, is very much less acute than that of most mammals. And it sleeps and feeds entirely alone.

But it has to have some kind of social life. With such blurred and blunted senses, how does on sloth find another in order to breed. There is one clue. The sloth’s digestion works just about as slowly as the rest of its bodily processes and it only defacates and urinates once a week. But most surprisingly, to do so it descends to the ground and it habitiually uses the same place. This is the one moment in its life when it is exposed to real danger. A jaguar could easily catch it here. There must be some important reason for it to take such apparently unnecessary risks. Its dung and urine has extremely pungent smells, and the senf of smell is the only one of the sloth’s faculties that is not seriously blurred. So a sloth midden is the one place in the forest that another sloth could easily find – and the one place, too, where it stands a chance of meeting another sloth, say once a week or so. Maybe a sloth’s midden is also its trysting palce, and there is certainly no other easy way of compiling one, except on the ground. We cannot, however, be sure, for no student of animal behaviour has yet been brave enough to contemplate the days and nights of stupefying inactivity that would have to be endured by anyone who wants to find out more about the sloth’s private life.

I read those paragraphs in 1982, and they stayed with me to the extent that I eventually formed a sports club named “The Sloths”, which celebrates its 25th anniversary this year (though, like its namesake, the Sloths are presently dormant).

Why this burst of nostalgia? Well, a week ago I was visiting one of Back of the Ferry’s all time favourite Sydney CBD bars, the SG, and there was a beer named “Three Toe”. I blinked a couple of times in surprise, got close and friendly with the tap head, and sure enough – here’s a pale ale named after the Three-Toed sloth (which remember “is considerably the more slothful”. Merchant Brewing Co have made a ripping American Pale Ale. It’s a great combination of malty goodness with a serious dose of hops. Merchant Brewing Co looks like a brewery to keep an eye on – and I hope the Three Toe Pale becomes a staple in their line-up as opposed to a seasonal.

*Life on Earth – A Natural History by David Attenborough. Published 1979.