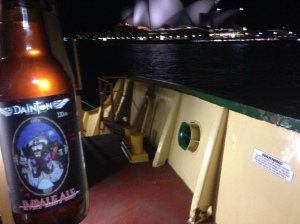 In the last month, two of your correspondents have had to perform their civic duty by performing Jury Service. Personally, I’m a big supporter of the system, but every time I’ve been summoned it has been damned inconvenient. On previous occasions I’ve been able to provide a plausible excuse prior to the event, but this time there was no escape and I had to front the Downing Centre near Museum Station. Again the timing sucked and I needed an out. Cutting a long story short, I provided the judge with an acceptable get-out reason and I avoided the two week aggravated burglary trial. Illiards wasn’t so lucky a month or so ago and did his two and half week trial without complaint. 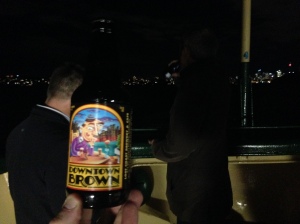 So what’s this got to do with beer? Well, just around the corner from the entrance to the Downing Centre, at 152 Elizabeth Street is one of, if the not best of the Sydney CBD’s best bottle shops. The Oak Barrel has a marvellous range of craft beers, which totals over 600 varieties. There are beers from Australia, NZ, Denmark, Norway, Lebanon, UK, US etc. There’s seasonals, one-offs and a couple of specials in a bargain bin. A sign boasts “Warning – Customer Service” and a pleasant conversation was had the cash register. In celebration of my latest escape for Jury Service and in tribute to illiards’ discharge of civil duty – a celebratory six pack of three pairs of uniques was purchased for the ferry ride home.

With the recent downturn in BotF blog output, we’ve failed to note Back of the Ferry traditions like the winter solstice and we’ve now well and truly moved into winter. The Back of the Ferry was pretty cold tonight – nothing too icy, but the beers purchased help knit a nice little beer vest that came in handy as we turned the corner at Bradley’s Head and the wind whistled through. First cab of the rank was Dainton Family Brewing’s Impale Ale. This is an American Pale Ale, that doesn’t nothing wrong without standing out. Lovely label. We had a sip of the second beer just as we hit the wind. This was a beautiful brown beer – warming, full bodied – a winter beauty. Downtown Brown is made by Lost Coast Brewery, which has been around since 1990 and whose master brewer (sic) is Barbara Groom (don’t see many women in that role). The highlight of the trip. The final beer came from the unlikely location of Lebanon. 961 Beer’s Black IPA came out of the bargain bin (there was still a couple left today). A great beer for the home straight, this Black IPA hides it 6.6% ABV really well. By no means a squinter, there was still good bitterness with a strong malt spine. Nothing like a three unique beer trip home.