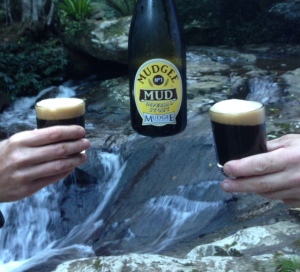 The “waterfall stars” of the area around Robertson are undoubtedly the Fitzroy, the Carrington and the Belmore Falls. We’ve discovered what really should be a fourth, but you’ve really got to work to get there. The Macquarie Pass National Park was created in 1970 and lies mainly to the south of the Macquarie Pass Road, which has made the squeamish sick and amused bikers since 1898. About two thirds down on the right hand side is a turn-off to Clover Hill Rd. There’s a small carpark here and a gate blocking what used to a road to a farm that was 3km in.

View from the clearing

The farm was originally created in the late 1800s. In the 1950s, a bloke called Turner, who made his money from manufacturing parachutes and then bikinis (I kid you not) rebuilt the farm house into a Tudor Mansion. He built a causeway across the Macquarie Rivulet and frolicked with his mates on the waterfall that we ultimately found. He came a bit of a cropper later on, the house was damaged in a fire and the National Parks took over the land and created the park. That means that after walking through eucalypt and rainforests for about 2km along an easy undulating path, you emerge into a succession of clearings with views to the ocean. You can see the ruins of the house (I’ll visit them next time) and there’s still fence posts around.

A thin brown track takes you down a steep hill to the Macquarie Rivulet, which is plunging down a narrow chasm. We dropped our gear and headed upstream. Along the way we passed a massive balancing rock in the middle of a small cascade. Just when we were about to turn back, we turned a corner and were rewarded with a fantastic sight – the Rainbow Falls. The falls tumble down into a reasonable pool in which a couple of the braver kids had a swim. Next time we’ll bash our way further upstream and try and find a way down past the chasm. It’s spectacular and well worth the 3.5km walk in.

Illiards and I weren’t going to make the same mistake with our beverage and I carried in a couple of glasses to enjoy a drop on site. Mudgee Mud
is an imperial oatmeal stout that comes in a sturdy 750ml champagne bottle, so there was no real chance of any mishap, like the day before. It had been a slog, so the restorative powers of the Mudgee Mud were welcome. This is a cracking stout. Intensely bitter, with strong vegemite flavours coming through. Much like Southwark or Sheaf Stout on steroids. At over 8% it gave us the Dutch Courage to roll up the steep ascent out to the main track. A terrific label as well with a story explaining the name. 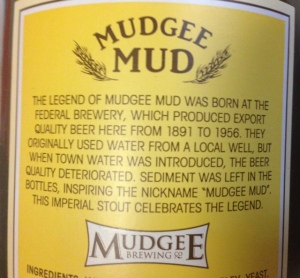