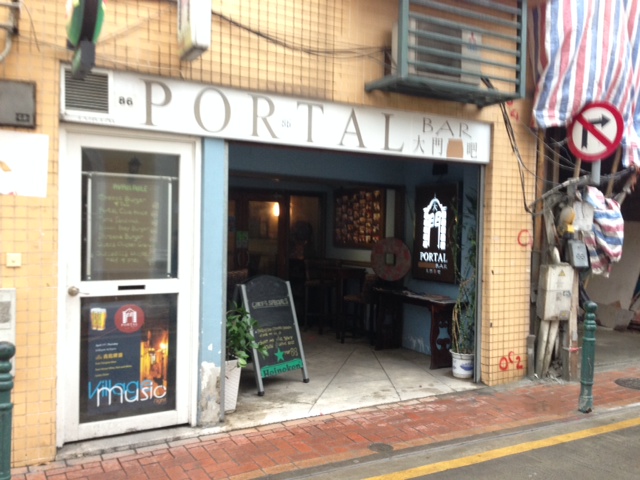 As previously mentioned, Macau is not a beer drinker’s town and it isn’t a pub crawler’s town either. An old Beijing buddy said once when I told him I was visiting a few years ago said “Macau! There’s only two things to do in Macau – gambling and whoring”. I think that’s a little harsh, but you can pretty much knock off the sites in a day and there’s much nightlife other than that provided by the Casinos. Lucky I was only visiting for a day.

After doing the old part of Macau (which I’d seen in 2009), visiting a charming little fishing village which could be done in 30 minutes and surviving a 3 hour thunderstorm – I needed liquid refreshment. Search “Macau pubs” and most search engines tell you about the Old Taipa Taverna. Taipa is an old part of Macau on the southern land mass. There’s a racetrack and an old Portuguese village that has been reasonably preserved. It is a micro version of Old Macau without the churches. There’s a number of Portuguese restaurants and a couple of blocks of souvenir and craft shops across 3 or so blocks.

I was really only expecting to find the Old Taipa Taverna, but on the Main Street that runs into Taipa Village was a pub called Portal Bar. Jenny, who served me, runs Portal with her husband who is from Perth. I bemoaned the lack of pubs and she said I hadn’t done bar street in old Macau. I told her that no books or websites talked about it. She was surprised. I’d done my Old Macau dash by then, and will file it away, but think it is probably a K-Bar scene.

There’s a few expats in Macau – mainly builders and engineers contributing to the construction of massive gambling temples. That’s the clientele of Portal Bar, which has trivia nights and live music. The tap beer range is ordinary and a few odd stubbies wouldn’t go astray – but I reckon Jenny and her hubby know what their punters want.

Before finding the Old Taipa Taverna, I copped a tip from Jenny and visited Casa de Tapas. This very swish tapas restaurant had a smart little bar with two for one Stella. Menu looked excellent, and if I ever make Macau with Mrs Bladdamasta, this’ll be the venue.

I finally reached the Old Taipa Taverna. It’s a beautiful old building with the Galaxy Casino complex juxtaposed in the background. The bar itself is all dark wood and is clearly another expat hang. The tap beer list includes Guinness, but at $13.80 a pint, I opted for watery Carlsberg. The best value is a bucket of 6 Tsingtao stubbies for $17.50. Setanta was on so I was able to catch up on Super Rugby. Service was shite and they wanted to hit me up for $10HK to charge my phone.

The sign in the bathroom looks the Old Taipa Taverna has had some issues – which means it is subject to the Taipa version of the NSW lock-out rules. That might have taken the wind out of its sails, but this place felt a little soulless – even if it was a quiet Saturday arvo. Could be so much better. 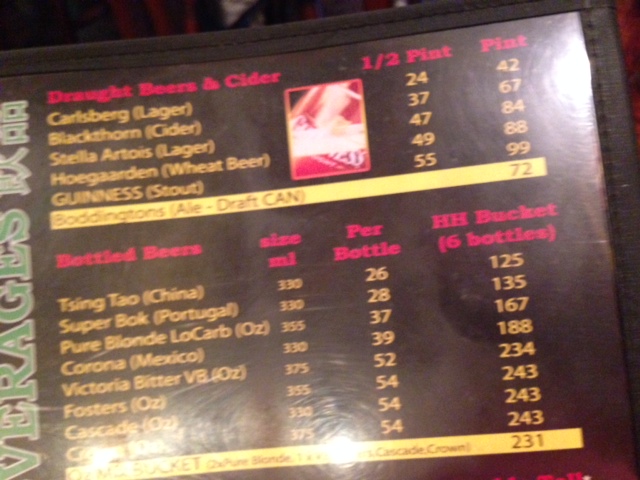