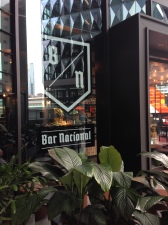 Most of the time, when this correspondent is in Melbourne, he schleps it down in whatever the opposite of the Paris End of Collins Street is. For a long time it has been a barren place, which has had the upside of forcing me into the ‘burbs of Melbourne. With so much development occurring in the Docklands district, however, there’s some cool places starting to emerge. A good example is Bar Nacional, which can be found at 727 Collins Street. To be honest, I wasn’t expecting much (bars in offices have a negative effect), but after a solid 90 minutes of good beer and some tapas – I’m a convert. I’m grateful to new BotF inductee, Toby, for the introduction.

Bar Nacional is actually quite well appointed. Comfy stools and a warm fit-out make it a chillsome place. The beer list offers a range of tap beers and some really interesting stuff in bottle. It is run by a couple Aussies that have been to Spain and were inspired by their culinary adventures. The food is brilliantly presented and the staff are passionate about what they serve. The crispy pig’s head caught our eye – and came out looking magnificent. The felafel shaped parsley crumbed orbs were light, but not as meaty as promised. The olives were very solid – but the stand-out was the dish of the tastiest choricito, which swam in a very moppable cider sauce. 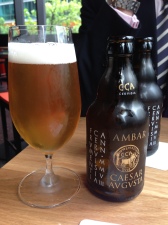 Whilst there was a good assortment of Australian craft beer (Hargreave Hill and Mornington), there was also a healthy range of beers from Spanish Brewer – La Zaragozana. Ambar Especial is the flagship, which is a typical malty Euro lager – but the other varieties held more interest. First up, we tried the intriguingly named Ambar Caesar Avgvsta. This is a beautifully packaged wheat beer. The banana is very prominent and it is a touch on the sweet side, but is very, very drinkable. Equally well packaged is the Ambar Negra – a Schwarzbier. There’s plenty going on in this beer. Again, I found it a touch sweet, but the mouth feel and the roasted maltiness make it a real pleasure.

Toby and I were I initially underwhelmed by our first couple of mouthfuls of the next beer we tried. 1906 Red Vintage is made by Hijos de Rivera, the makers of Estrella Galicia – another malt bomb. 1906 Red Vintage is a marzen with a beautiful red colour. Even though it was a big 8% and had a very yeasty smell, the first couple of sips were underwhelming. But this beer grows on you and the malt became bigger and bigger. By the end of the glass it was having a powerful impact. I’ll be back just to try this beer again. As good as the Spanish beers were, I had to have a glass of the Mornington Imperial Stout. This black beauty is just dribblingly good. Black as pitch, velvet to drink and massive in flavour. Doesn’t get much better than this. 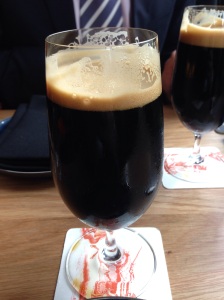