The 2013 edition of the Melbourne Cup was shaping up to be a shocker. I was crook, there was no free lunch to be found in these expense challenged times and we couldn’t even get the television to work on our floor. So, for the first time in my memory – I bailed early and went home. The ferry was a solo trip, and as I’d volunteered for driving duty – a light beer was the only option.

I wasn’t going to let the whole day go to waste and I at least used the time on the Back of the Ferry to have a half decent read of the form. Melbourne Cup is a mug’s race. There’s 24 horses and plenty haven’t even run in Australia in anger before they put hoof on Flemington turf. Basically it is a crap shoot. The good thing is that because there are so many mugs having their once a year flutter – the pools are huge and favourites pay good odds. If you jag an exotic it is generally happy days. Well, that is what happened to this correspondent. The trifecta was claimed with a modest wager and there is nothing to lift a malaise like a juicy trifecta pay-out. There’s also nothing more satisfying than declaring “Bugger cooking, love – I’ve won on the Cup” and taking the family out for a big feed (even if I wasn’t really up to it).

Our usual haunts were still well packed with now well soaked punters. Girls’ fascinators were either crushed, askew (hard to tell actually) or gone. Heels were off and champagne fuelled hangovers were still being worked on at a furious rate. “Perhaps we should give the Phoenix above the Steyne a go,” opined Mrs Bladdamasta. I wasn’t so sure. Whilst the trifecta divvy was a health one, the Phoenix has very good form at parting laowei from their hard earneds without you really realising it. Plus I’ve had an unofficial ban on them since the Phoenix charged me for tea at Yum Cha at the old site. Well, have no fear. The Phoenix above the Steyne is an absolute winner – particularly if you take the advice of the two gentlemen in the photo and go on a Tuesday. That’s double dumpling and pancake day, which sets you up well to only order modestly from the Mains menu. The menu isn’t extensive. If you want seafood – you pay for it, but there’s tanks of fresh fish and Pippies in XO sauce goes well anytime. My Honey Pepper Beef Cubes were awesome and the Peking Duck pancakes (when 2 for 1) are a great entrée. This family will be returning to the Manly Phoenix.

The tap beer range is uninspiring (rarely is that the feature of a Chinese restaurant. There was however a surprise. White Horse Lager is a revival of an old Tooth’s label, that Carlton have launched in limited release. Rather than repeating the whole story, it is best that you read this article by The Shout. The white horse is the symbol of Kent, UK, from where John Tooth, the founder of Tooth & Co, comes. Hence Kent Brewery, Kent Brown Old etc etc. It could just be Carlton Draught to be honest. Very same old, same old lager, quite pale and inoffensive. I am a fan of a more malty Tsingtao with a good China – but with a raspy throat, anything easy to swallow and provide anaesthetic qualities was welcome. A novelty at best.

So – a memorable 2013 Melbourne Cup. The trifecta, a decent China, an Untappd unique and sober. 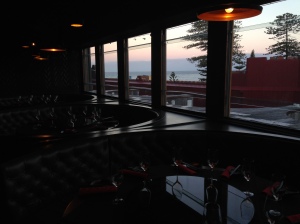 Chinese with a view