Glorious sunshine, major earthquakes, 200km/hour wind gusts, and of course magnificent craft beer have been the highlights of this correspondent’s first 2 and a bit months living back in Wellington, New Zealand.

DROP! COVER! HOLD!…..three simple words on the tip of all Wellingtonian’s tongues as a series of quakes have rocked the city over the last 4 weeks or so.  First was the 6.5 magnitude shake up on July 21, then came another 6.6 hum-dinger on 16 August.

Quakes come as no surprise in Wellington as the city lies on a massive fault line similar to San Francisco. However, this correspondent went diving under the table during the latest shake up. It scared the be-jesus out of me! I thought “this is it, the big one, we’re all going down”.

Checking damage after the rattle and shake!

Amongst the quakes there’s been some stunning days as well as a storm that had winds of 200km/hour that tore off roofs, sent trampolines flying, ripped down power cables, and obliterated trees. I had the misfortunate of losing power for over a week. Fortunately family and friends took me in. 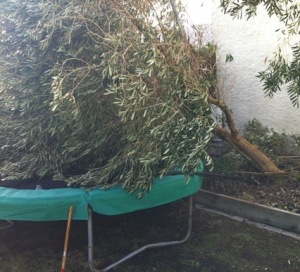 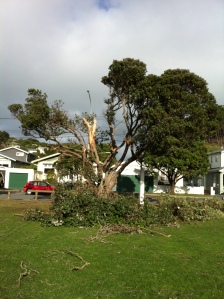 Mother Nature has made her voice known in the nation’s capital that’s for sure. The way Wellington has come together in these trying times brings tears to the eyes. After the latest quake, train lines out of the city were shut down. CBD workers were literally stranded. However, those with cars drove to the railway station and made sure everyone had a ride home – strangers coming together to help each other out in tough times.

One of the best ways to try and unwind after such events is to relax amongst Wellington’s booming craft beer venues.

I’d heard a lot about a place called Hashigo Zake. A fairly new craft beer bar. They describe themselves on their website: “ we serve the best that New Zealand’s booming craft brewing industry has to offer”.

For our Australian readership, the entrance to Hashigo Zake will have you thinking you’re in Melbourne as you go down a small alley way off a main street.

The entrance to Hashigo Zake – is this Wellington or Melbourne…

Upon entering the Japanese themed bar and heading down the stairs, the CBD felt a world away. A perfect place to escape the city yet still be in the city. It’s a small bar, but a perfect place with a great atmosphere.

Hashigo Zake – an escape from the city but in the city

The bar staff we’re an absolute pleasure to speak to about their beers. It’s a simple thing, but friendly and knowledgeable bartenders are hard to find. Hashigo Zake has them!

I decided on a Renaissance Great Pumpkin Ale. I nearly ignored it as one doesn’t normally associate pumpkin and beer. Just as well the bar tender got me to try a sample. After the first sip I had to order a pint!

The Great Pumpkin Ale isn’t your everyday beer. It has a distinctive aroma of spices, kind of like cinnamon. The taste is quite malty with the spices coming through, along with the subtle taste of pumpkin pie! There’s definitely a lot going on with this beer. Each gulp had me guessing as to the different ingredients. 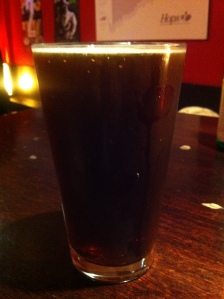 I’ll definitely be back to enjoy the great service and atmosphere at Hashigo! The range of craft beers will you have salivating!

One final note – the advantage of being in Wellington is being able to stroll down to the local park to catch some local club rugby involving some of the best players in the world, including the controversial figure of Ma’a Nonu who turned out for his local club Ories. 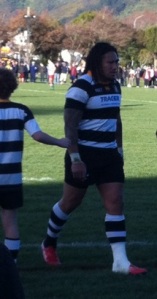 Until the next Wellington craft beer bar (and hopefully no more earthquakes)…..