Tipples is no more

When we started Back of the Ferry in 2009, WordPress (our blogging host provider) did this thing where they’d say in a dorky, gee whiz kind of way “hey, great post – these guys have written about something similar. You should check them out”. WordPress don’t seem to do that any more, which is a shame because it introduced us to some great characters, two in particular. They are listed on our favourite blog list which is on the side of the website. To be honest we don’t update that list often, but we’ll have to now because of some big news in the beer blogging world (at least in the virtual circles BotF moves in).

Our old mate, A Great Set of Tipples or tipplesbeer.com, has called it quits. That’s the bad news. The good news is that Leon (aka Tipples) isn’t stopping blogging, he’s simply decided to broaden his subject matter and create a new blog called Drink, Pluck, Yell. Unlike a number of blogs, Tipples did the classy thing and announced “that’s it” and so whilst A Great Set of Tipples will live on, it has a demonstrable full stop. BotF looks forward to a regular dose of Drink, Pluck, Yell and it’s been too long between collaborations between Tipples and BotF (eg here) and we’ll need to arrange that soon. 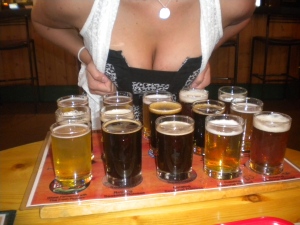 An example of a blog that looks like it is past tense, but hasn’t posted a full stop is Boobs, Breweries and Beer. This was a short lived but classic beer blog with a unique rating methodology and attitude to beerporn. They haven’t posted for a long time, which is damn shame. It was funny.

Another blog we discovered through the WordPress intro is Tilting Suds. Over the years, we’ve exchanged comments on our posts and learnt a little about our respective cultures (Tilting is from Texas). The philosophy of our blogs is quite similar. Tilting Suds says “Beer, music, movies but mostly beer”. We couldn’t have said it better ourselves. Tilting could be a sub-editor and there was no finer effort than when he featured Back of the Ferry in a recent post. Anyone that can wind Frank Booth into a beer review deserves kudos. Tilting’s been off the air for a little while. Hopefully he’s just hibernating and he’ll re-emerge soon.

Today’s obligatory post beer is James Squire Chancer. The James Squire rebranding has been around for awhile now, but has recently spawned some imitators. More on that later. In the meantime, enjoy the photo. 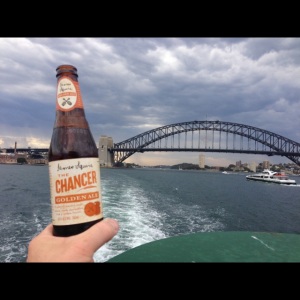