Auckland’s viaduct area is a very easy place to go. There is no shortage of bars and restaurants lining the boardwalks that wrap around the harbour. Moored to just about every piece of board walk is an expensive boat. Even on a crap, like the one I’m experiencing, there’s plenty to look at. 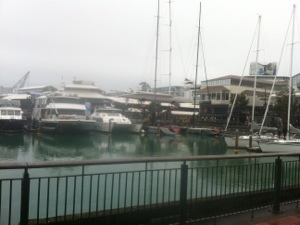 I visited the Fox (Alehouse or Sport’s Bar) on my first night and tried a forgettable house lager called Fox’s Ale. No-one knew much about it’s origins and I won’t spend much time researching it. The Fox would appear to be open anytime a sporting event is on and on my way back from breakfast with Mrs BotF, I noticed a rugby game between Wales and Samoa was on. You’ve got to like the UK NZ time difference.

For the fourth time, Manu Samoa beat the Welsh in Wales. It is remarkable given that less than 200 thousand people live in Samoa and 3 million live in Wales. Whilst the ratio of rugby players per head of population is higher in Samoa in absolute terms there’s almost 4 times as many registered players in Wales than Samoa. I caught the last thrilling 15 minutes and the strength of the Samoans was incredible. Despite missing 5 points in goals they did enough to score a try and hold on. Their scrum was insane. Congratulations, Manu Samoa.