The first postcode I resided in when I obtained the “inoz” suffix was NSW 2041. That was some 13 years ago when the Wallabies held the Bledisloe and the RWC, and my only exposure to Aussie beer was VB and Tooheys.

Fast forward to 2012 and the only thing on the above list that still holds true is that I’m back in NSW 2041 (with a number of different postcodes in between including a couple of other countries). For those who aren’t in the know, 2041 is the Balmain/Rozelle postcode –  the glorious inner west!

2041 is well known for its old style pubs such as The London, the Dry Dock, the Riverview and many more.

The latest entrant into the popular Balmain pub scene is East Village Balmain. They aptly describe themselves on twitter:

“Balmain’s only true craft beer venue dedicated to serving real beer and real pub food to real people every day and night of the week”.

East Village Balmain is a fantastic bar and restaurant that this correspondent can now stumble home from after working through the latest in craft beer without needing a cab fare. This is well worth the trip for those looking for somewhere new. It’s only a stone’s throw from Balmain East Wharf.  It’s the old Belgian Beer Café.

The early sitting showed that this is a family friendly pub, with plenty of rug rats and older kids enjoying pizza while their folks enjoyed their end of the week beverage in the dining area at the rear of the pub.

The front area is rug rag free, in fact we enjoyed our food and drinks while almost forgetting the other area. East Village Balmain is a place for all.

Mrs kiwisinoz and I had a fantastic meal consisting of chicken wings, croquets, and pizza a couple of Fridays ago. You really know you’re in 2041 in this place. The walls are lined with photos and pictures of the area dating back to the early 1900’s. There’s also memorabilia from the area scattered throughout.

Some great memorabilia from the glorious inner west.

Onto the beer review. It’s Stone & Wood’s ’The Mash Collective’ Amasia Rumweizen. It’s actually already been reviewed on this blog, however, this correspondent has a different view to the one already documented. This drop is described by Stone & Wood:

The first brew from our side project The Mash Collective is a rumweizen called Amasia. For this single batch, we’ve taken a classic German dunkleweizen and mashed it together with molasses, the core ingredient of a popular local spirit. Blended with some brew house magic, we finished it off with a splash of rum. Think fresh local bananas, loaded with rum and raisin ice cream and dark chocolate with the lingering warmth of a fine spirit.

For me, it was too exotic. The rum flavour was over powering. It certainly didn’t taste like just a ‘splash’. It was not enough of a beer for mine. However, credit to Stone & Wood for having a crack at this. As mentioned, others have viewed it more favourable so it must be doing ok. 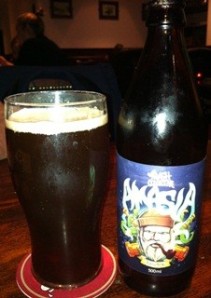 Stone & Wood Amasia Rumweizen (maybe I need to try it again to appreciate this one?)

I’ll certainly be back to East Village Balmain to experience the magnificent food, service and variety of craft beers in the fridge….and then stumble home afterwards.