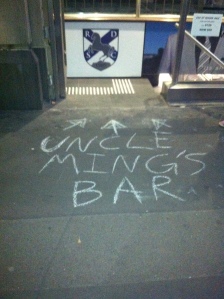 Another week and another new bar in West Wynyard – and what a bar. Uncle Ming’s Bar has very recently opened under and next to a suit store in York Street. It is tricky to find (and I walked straight over the top of the very helpful chalked directions), but persist because you will be rewarded. Uncle Ming’s Bar was the subject of a little bit of a serve from Rachel Olding in her Tuesday Bar Hop review – but I’d ignore that.

Once you’ve negotiated the stairs and passed by the suits and step through the door – you are as close to being in China without being there as you can get. As has been recorded on these pages many times, I’m a real Sinophile and standing Uncle Ming’s made me yearn for a pub crawl down Nanluogu Xiang – Beijing’s famous bar alley. The back story claims influence from a Shanghai speakeasy – but I felt it was much more Beijing hutongesque.

When we returned from Beijing, all of our belongings were shipped home in a container. As we had some notice, I was able to fill the spare space with some Chinese kitsch, much of which Mrs Botf detests. High on her council clean-up hit list are my “duck buckets”. which come out at parties and are receptacles for ice and beer. To see exactly the same duck bucket on the bar at Uncle Ming’s warmed my heart – and I’m glad I retrieved them yet again from the street. All the shelves, lights, tables and doorways are genuine Chinese gear and the ambience is just splendid.

Furniture not from Vinnie’s 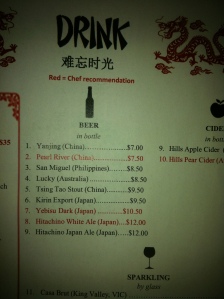 Equally splended is another unique West Wynyard beer list. Spirit drinkers are the ones really looked after (apparently), but there’s nothing wrong with 4 beers from China, 4 beers from Japan and one from the Phillipines. They range from a bland macro lager (Yanjing aka Chinese VB) to Tsingtao Stout and a couple of Japanese Craft beers. Having had a couple of thousand Yanjings before I opted from a couple of @untappd uniques. Yebisu Black is more dark than black and taste quite European. It is very malty, quite pleasant and very easy to drink without knocking your socks off. Always interesting are beers from Hitachino Nest. The Japanese Classic Ale is a self proclaimed English style IPA. The best word to describe this beer is subtle. It pours a lovely colour – almost orange instead of amber. The aroma is hoppy, but the actual taste is muted. There’s hops in there, but it is very understated. There was something else going on, which made the beer quite sweet. Perhaps another visit to Uncle Ming’s Bar is called for to find out. 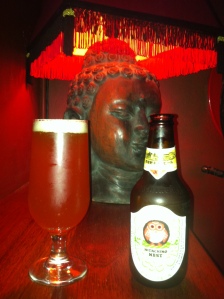