Hole in a wall

The Sydney CBD is a pretty large area that isn’t really broken up into areas or localities. Other than The Rocks or Millers Point, which still share the same postcode as Sydney, there aren’t really names for areas. You might say “around Town Hall” or “near St. James” to give a guide, but it isn’t that helpful. But when a little pocket of the Sydney CBD is blessed with such a fine collection of small bars, then this pocket really needs a name. The pocket to which I refer is bounded by George Street to the East, Market Street to the South, Sussex Street to the West and sort of Jamieson Street to the North – and I shall name thee “West Wynyard”. 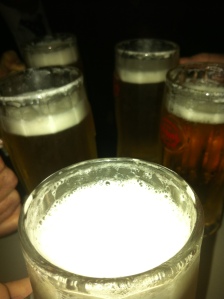 At last count, I reckon that there are at least 10 small bars in West Wynyard, including Sydney’s first ever “Small Bar” as per the licencing laws definition. Given that heritage, it is only right that West Wynyard should be regarded as Sydney’s mecca when it comes to small bars. Spooning Goats, Mojo Record bar, Balcony Bar, Stitch Bar, Shirt Bar, The Foxhole, Since I Left You and Grasshopper are all to be found here – and I am reasonably confident there are others. Small Bar crawl – here we come. 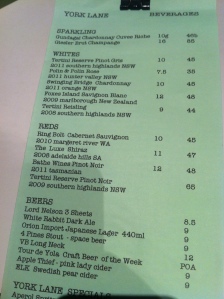 BotF went on a small tear on Tuesday night with a few work-mates for the obligatory post off-site “debrief”. We ended up at Hart’s Pub to join in their Tuesday night trivia comp. More on that, separately, but between the Mojo Record Bar and Hart’s – BotF pulled into a hole in the wall called York Lane” (Bar?), which is in York Lane north of Erskine. We were on a mission and drained our handle of Orion quite smartly, but I recognised that York Lane deserved a more relaxed and studied visit. So on clear, but bitingly cold Sydney lunchtime, I pulled in for a feed and a beer. The menu is surprising varied given the size of the place (capacity is 30 people). On another occasion I’ll have a crack at the cheese board, but given the cold – I opted for a lamb stew. Brilliant. Slow cooked, with tender chunky shreds of lamb in a rich tomato base and plump cannelini beans – this was perfect winter fare. Mightn’t have been big but it was wholesome. These fellas work hard and York Lane is open from 6.30am to 10pm (Mon – Wed) or 12pm (Thurs – Fri) and on Saturday evenings. 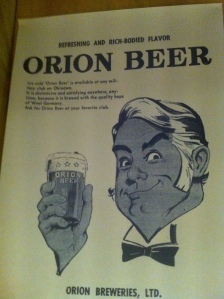 Now given their space constraints, it’s no surprise that their beer list is not huge – but gees – short but very eclectic. If you are going to have a stout – 4 Pines will do the trick and there’s nothing wrong with the locally brewed (from West Wynyard’s neighbouring Millers Point brewer – the Lord Nelson) 3 Sheets. What’s very nifty, however, is how they squeezed in a little temprite machine from which they are pouring ice cold Orion Beer. I’ve only seen this once before in the Grace Darling Hotel in Collingwood (also on tap). Orion Beer comes from Okinawa, Japan and according to their almost entirely Japanese website is “For Your Happy Time”. The wonderful poster that is on display in the bar reflects Orion Beer as a drink for US servicemen that were stationed in Okinawa (and maybe still are). There’s no longer anything German about Orion – it is a very inoffensive, slightly sweet malty beer. Very clean and very simple. Orion Breweries make at least 7 varieties including the unfortunately named Zero Life