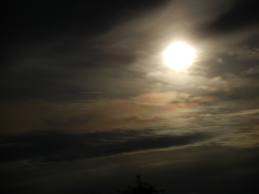 For a surfer or fisherman its often handy to know what the tide is doing. On the East Coast the tide comes in with the rising moon for a high tide a couple of hours after moonrise. Likewise if you see the moon half way down the western sky, it’s dead low tide.  Moon directly overhead, its mid tide going out. And of course the tide is roughly an hour later than the day before (or 1/28th of a day) as the moon takes 28 days to orbit the Earth.

Having grown up on the East Coast it was a surprise to visit SW Australia and find there is normally only one small tide a day..and it’s the same time very day. Dead low at around 11am every day. What’s going on there?

My take is that the tides are coming from east to west with the Earth’s rotation making it pretty straightforward on the East coast. On the South West Coast, the tide sloshing around the top end of Australia takes around 6 hours longer to reach the SW coast than the tide sloshing around the bottom of Australia. The result is a destructive interference between the high and low tides completely cancelling the normal lunar tides. All that’s left is the difference between the morning and evening high tide…ie one tide a day. Or something like that.  As you head up the West Coast the destructive inteference decreases until it becomes a constructive interference aroound the Kimberley Coast resulting in some of the biggest tides in the world.