When I was a young fella, I spent 3 formative years living in London. One Saturday afternoon, the old man decided to take me to a football (aka soccer) game. We lived in South Kensington just off Fulham Road – so it was a choice between Fulham FC or Chelsea FC. As fate would have it, Chelsea were playing at home, Fulham were away and from that day forth – I’ve been a Blues fan. The excitement of being on the terraces in the 70’s when the players could barely be separated from the acts in the Top of the Pops was created a lasting impression on a less than 10 year old. Chelsea in particular was a glamour club, albeit in decline when I started to follow them. For a long time, being a Chelsea Fan was as futile as the other teams I’ve grown up to follow – anything from Cleveland, the North Sydney Bears and even the Eastwood “Woodies”. A good season was not be relegated and a good FA Cup run. Well, fast forward 39 years – and how that’s changed. Chelsea are now the Champions of Europe. It was a tough night – coverage in OZ didn’t start until 4.45am, the game went into extra time and then had to be settled by a penalty shoot-out. The nerves were shredded by the time the imperious Didier Drogba stroked home the final and winning penalty. Chelsea – Champions. 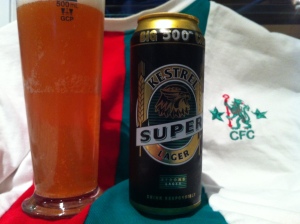 By the end of the game, I’d woken the family with cries of “nooooo” and “yeeessss” as the match ebbed and flowed. As much as I craved a celebratory lager – an appropriate example had to be set and I waited until a more civilised hour. A quick check of previous posts revealed that I’d already tried London Pride. The only UK beer I could find in a nearby bottlo that I hadn’t tried was a 500ml tin of “Kestrel Super Lager” from the “Crest Brewing Co”of Bedford. I think that this is brewed by a subsidiary of Wells & Young – which is fairly well respected brewer – but it is just very difficult to tell. If Well & Young is the owner, they may be being deliberately coy – because there’s a little controversy about these 500ml tins of super charged beers in the UK. Apparently these 9%ers are the favourites of the homeless and the target of a prevention campaign. “The campaign focuses on the fact that a single 500ml can of 9% super strength lager contains four and a half units of alcohol, which exceeds the Government’s daily recommended safe alcohol limit of between two to three units for women and three to four units for men.” Fair point – but if you ban these, the homeless move back to flagons of cheap red. The Kestrel wasn’t the worst experience. The alcohol is very prevalent, but there’s an underlying maltiness that comes through. Probably really cheap in the UK and I know that this has been the friend of many a UK student. 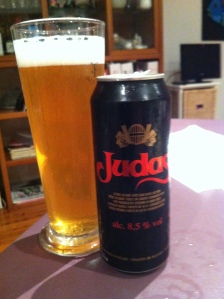 A better example of a super-strength beer is a tin of Judas. I picked this up for the reasonable $3.99 and wow – this was 500ml of Belgian splendour. It has that chunkiness of a Chimay, but not overwhelmingly so. There was a sweetness at the start, but it soon disappears and is replaced with a rich malty aftertaste. It is apparently a similar style to Duvel. Can’t find out why it’s called Judas and apparently doesn’t warrant its own website. Definitely worth a try – and a far more subtle super strength beer than the Kestrel.