When we get the ferry across Sydney Harbour, we only cover a small portion of this vast body of water. There’s many bays, islands, beaches, headlands and tributaries that make up what is loosely termed Sydney Harbour or Port jackson. I had an opportunity to see a small part of the Harbour that we can see every day from the ferry but never get close up to. Chinamans beach is a small harbour beach that is very close to the Spit Bridge. It has views to the heads and is surrounded by some houses that are worth serious amounts of coin.

A good mate’s brother has purchased a small fishing trawler. This is my kind of boat. It has a diesel motor and you start it much like starting a car. It is extremely fuel efficient – has very few moving parts and just putt-putts along at a very mellow pace. There’s enough deck space to pop up a few chairs, there’s a sound system and a good spread of undercover and open deck. A very simple, very low maintenance boat. We drove it to Chinaman’s, threw out the anchor and revelled in some fine March sunshine and enjoyed a great Sydney day. One of the lads threw out a line and within 5 minutes we snagged a healthy sized Benito – luxury.

The only cloud in the sky

With some March sunshine beating down upon us, the beers eventually came out. I cannot remember from where I picked the first beer up. Latitude Highland Pilsner is from Scotland and is a perfect back-of-a-boat beer. A 3.9% pilsner, it is so easy to drink. That’s not to say there’s no flavour – it’s a damned fine example of the pilsner style – but it is perfectly mild and unaggressive. There’s a number of hop varieties in the mix, but they operate at a low buzz. Always love a 500ml bottle.

After a quick dip in Sydney Harbour, I had a refresher with a stubbie of one of the best named beers going around. Belgian Law Mower is made by the South Nowra Brewer – HopDog Beerworks. They are right up there in the beer naming stakes alongside Murray’s and Moondog. According to their website they’ve got brews in the offing called “Alluvial Peach”, “Coffee Pants” and “Ham on Rye”. They’ve named this one Belgian Lawn Mower because it use a strain of Belgian yeast and would be perfect to drink after mowing the lawn. Quite logical, really. There’s a Coopers Pale Ale mouthfeel to this one. Quite effervescent and a real malt hit. I love it and I really hope I can find an excuse to drive through South Nowra and pick up a growler or two. 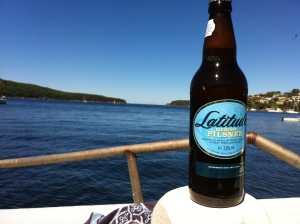 Looking out to the heads