The Queen Mary 2 has been written about before on Back of the Ferry, when it came into Sydney Harbour with the Queen Elizabeth. This time the ships came in separately. The Queen Mary 2 this time berthed at the Overseas Passenger Terminal at Circular Quay, and it just looked amazing. It dwarfed everything around it and it was great to get up close and personal to it. We’d been led to believe that it would depart at the same time as the 6pm ferry, which would have been interesting – but that wasn’t to be. At least the weather was fine. I haven’t seen it blacker or wetter in Sydney than this morning.

A special boat needs special beer and Vintage Cellars at Wynyard is continuing to introduce Orstrayan craft beers from outside New South Wales. They’ve had a couple from Bridge Road recently and today they had almost the whole range of bottles from Matso’s Broome Brewery. It’s terrific that a micro-brewery in Broome can export their beer all the way to Sydney. Matso’s is named after the Matsumoto family that used to live in the shop that now houses the brewery and restaurant that would have to be the first place to visit if you went to Broome. According to the website, they’ve got 5 bottled beers on the go at the moment. We got three of ’em and they got the royal beerp0rn treatment. The labelling is magnificent and I love the Oriental character that marks all the bottles.

We started off with one of the best named beers in the world. Smokey Bishop Dark Lager is named after Broome’s version of Friar Tuck. This is a beaut Dark Lager that claims chocolate – but I reckon a jar of vegemite wasn’t far away at the time of brewing. Pommy_ch & Lamb0 gave it 5 stars on @Untappd, but that’s because they arrived late and relied on me for a beer. It’s a ripper. The Mango Beer didn’t grab any of us. It tasted a little like a flat Passiona. We were however advised on twitter by @DocSherrin that “On a hot day – these are great”. The last was the Ginger Beer. I’m a sucker for ginger and they didn’t spare the buld on this one. A really good drop. They advise a little bit of rum with this one. 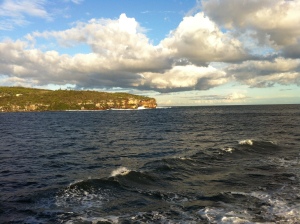 By the way, the journey home on this trip with some swell. The waves were rolling in a straight line across North and South Heads and rare breaks like the Dobroyd Bombora were going off. Love the ferry trip on days like this.