Whilst there’s been a number of one-off journeys on the back of the ferry, all of January went by before all of the foundation BotF members were able to make a trip home together in 2012. Like much of January, the journey was damp. Brollies are now an almost mandatory item out the back. February is predicted to be worse with 22 of 29 days predicted to be wet, and that’s an optimistic meteorologist’s view. Luckily the harbour throws up interesting stuff regardless and on this particular journey a seal bobbed up a couple of times playing with a fish. This correspondent can’t recall seeing a seal before. It’s also good to see that the recent Costa Concordia incident has revived the art of a good fire drill on a cruise ship.

Several needed to brighten the gloom

Manly’s continuing to add venues to its already burgeoning list. The latest addition is Harlem on Central. Even without a few bevvies under the belt, this is a hard place to find. Mainly because the entrance is not Central Avenue, but rather on Sydney Road. Once in, it is then hard to read the menu. I ended up pulling out my iPhone and using the torch feature. The menu reveals a great range of cocktails – which is the main game – but the small list of beers are solid – led by Sierra Nevade Pale Ale. A good place for date night, though we ended up eating at the local Japanese because although the food was delicious it was in morsel size.

One of my favourite new brewers is HopDog BeerWorks . This self-proclaimed “microbrewery” has started to pump out an eclectic range of humourously named and extremely flavoursome beers. I tried a Black Sunshine last year at Harts Pub and was an instant convert. It made such an impression that it made my top 5 in the Hottest 100 beer vote. I was delighted to find it at Beer Cartel – a great little bottleshop in Artarmon. This Oatmeal Stout is packed with flavour. It has the roasted texture that I love in stouts and there was plenty of long lingering mocha happening as well. I don’t often get to South Nowra, but HopDog provides a damned good reason. They have a brewery door thing on the weekends, and you can get growlers filled up as well. 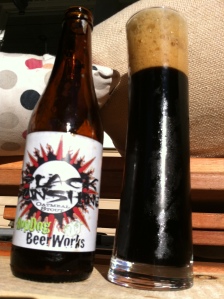