Happy New Year to all BotF readers. For the last couple of days, this correspondent has been enjoying the delights of Rainbow Beach with another BotF correspondent – TfT or as he is more formally known – Tony from Toowoomba. Rainbow Beach is 73kms north east of Gympie. Amongst other things it is the last mainland surfing beach heading north up the Queensland coast.

It’s a real BCF kind of place. Fraser Island is accessible from Rainbow and most of the coastline allows for 4WDs. There are thousands of people camping along the coast at designated campsites and the campsites are chokkas. TfT has already discussed the favour able crabbing conditions and I ventured out with him to check the traps.

TfT had a tinnie that seats 5ish. You launch from Carlo Point into the quaintly named Tin Can Bay. Tin Can Bay runs up to channel that separates Fraser Island from the mainland and has numerous inlets and mangroves and sand islands. The mud crabs love it up here and TfT has hired 4 traps. You’ve already seen some early catches, and again there was success. “$60 muddie in Sydney” opined TfT. 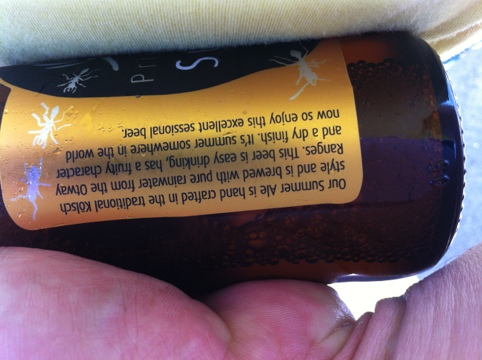 The beer du jour was Prickly Moses’ Summer Ale, appropriate because nothing screams summer like mud crabbing. It has all the hallmarks of a summer ale – light, easy to drink, a little lemony and could be drunk all day. Pours a little cloudy, and holds its head well.