Melbourne’s inner suburban pub scene is simply sensational. On a recent visit, this correspondent was able to do a quick sprint through Richmond and the next day, visit a couple of pubs in North Melbourne next to the Queen Victoria markets. I’m slowly building up a list of pubs that I look forward to spending much longer times sessions.

According to my source of Melbourne pub truth – MelbournePubs.com – there are 47 bars and pubs in the suburb of Richmond. That’s not a bad effort. Of the 7 I visited, the Great Britain Hotel is the one I’d return to for a decent old session. There’s a good range of beer on tap – both White Rabbits, a couple of Little Creatures, a couple of Coopers and McLaren Vale – and amazingly no Carlton Draught, but I’d just return for the surrounds. Plenty of old couches, plenty of nooks and crannies, plenty of interesting paraphenalia and a good beer garden make it a place that simply good to drink in. 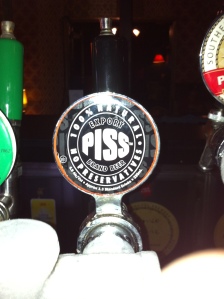 The Great Britain Hotel is also the birthplace of Piss Lager. Piss lager started life as the house beer for the GB and doesn’t pretend to offer anymore flavour than Fosters or XXXX. Piss just has a sense of humour like its light variety – “Piss Weak”. It’s totally inoffensive stuff and would be a fine session beer. I don’t think I’ll be able to resist and I’ll be getting a Piss Pak soon (t-shirt, stubby holder and a stubby of Piss and a stubby of Piss Weak). There’s a pub in Greensborough that also sells Piss. 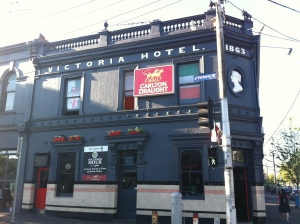 The next day I found myself in another pub painted black. The Victoria Hotel is diagonally opposite the northeast corner of the Queen Victoria markets. With its black paint job and white portrait of Victoria, it looks like a big Penny Black. It is part of the Bev & Mick’s backpacker empire, which comprises of a handful of pubs that have been turned into backpacker places. They’ve retained the drinking part and added accomodation. They’d be plenty of fun when packed, but I think I’d prefer to be in the Drunken Poet down the road.

So second black pub and like the Great Britain, the Victoria offered a house beer – Bev & Mick’s Draught. I asked the barman for a pint and he looked at me and said – “Are you sure?”. I changed my order to a pot. Like Piss, it wasn’t unpotable. It was pretty cheap and would do a fine job if you were a backpacker. This isn’t a widely reviewed beer, but our trusty mate, Tipples, comes up first in a google search for Bev & Mick’s Draught. Difficult to draw a different conclusion to the sagacious Tipples. The barman reckoned Bev & Mick’s Draught is made by Southern Bay Brewing, but they don’t own up to it on their site.