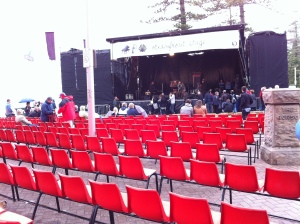 Yesterday the insular peninsula was all abuzz as the Manly-Warringah Sea Eagles competed in the NRL Grand Final. Whilst Back of the Ferry is an insular peninsula centred blog, not all the correspondents are rapt in the Sea Eagles. This particular correspondent was a North Sydney Bears fan, and still hopes that they re-emerge in the NRL as the North OF Sydney Bears, playing out of Gosford. Norths demise as an NRL team was entirely Manly’s fault, and I haven’t yet been able to bring myself to say “Go Manly”. They played well yesterday to win another premiership, but I don’t think I’ll ever forgive them enough to cheer for them. 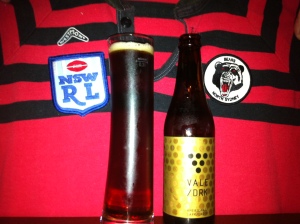 I watched the grand final in the company of a four pack (grrr) of the third of McLaren Vale Beer Company‘s four beers that we’ve reviewed – Vale /DRK. Tony from Toowoomba and I were hugely enamoured with Vale Ale and I was slightly underwhelmed by Vale Dry. Well it is now 2 out 3 on the positive side of the ledger for McLaren Vale Brewery Co. Vale/DRK is a ripper of a dark beer. Self proclaimed as an American Dark Lager, it is as crisp and refreshing as the label hyperbole boasts. I’ve had it on tap as well, and either way the cocoa/coffee taste comes right through. This is a must try beer.