Today decided would have a trip across to Cardiff for a bit of shopping with the kids.

We caught the train from Brunel’s Bristol Temple Meads on the Great Western Line. It was a short trip of about 40 minutes under the Bristol Channel and over the border to Wales…. needless to say we had a bit of rain.

Cardiff has a lot of shops, malls and arcades all within easy walking distance off Cardiff Central.  After plenty of tramping round the shops we decided to go for a pub lunch.

We picked out the pub the Owain Glyndwr, not far from Cardiff Castle. A picture on wall depicted men of Harlech. Looking up Owain on the net, he lived around the 13/1400’s, was last Welsh Prince of Wales and instigated a number of Welsh revolts, and part of the Harlech castle siege by Henry V. Owain in recent years apparently was voted as 23rd of the 100 Great Britons( Churchill is number one and Brunel is number two …..). Also noted on wiki the famous “Men of Harlech” is the regimental march music for two Aussie Army reserve units. 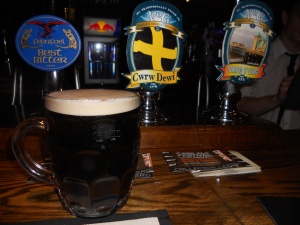 Back to the pub, a good variety of beers on tap, usual lagers, a few ciders and a number of cask ales. A good menu and the food was good. On the beer front, I went for a Welsh beer that the barman recommended, Cwrw Dewi. This beer is from Barry in Cardiff Bay, the Vale of Glamorgan. A very dark beer, has a bit of a malty tang and a bit of an edge. It was fairly potent at 5% and a couple was more than enough. Never seen this side of the Bridge, but would drink again. I also sampled it stable mate Grog Y Vog (a more of amber ale type). Don’t ask me how to pronounce.

Also of note in this bar … if you drank 7 real ales you would get your 8th for free (sorry was not up for this). This is part of a cask ale (Great British ales and ciders) festival running throughout October.

Back to a few west country beer blogs to come shortly.