The Back of the Ferry 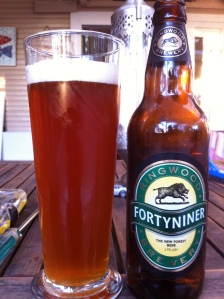 Fortyniner is a flagship brew from the Ringwood Brewery located in Hampshire, England. Website hyperbole blathers on about beer being brewed in the region for centuries ever since some bloke worked out that mixing the water from the River Avon with adjacent barley made you pissed. In 1978, a bloke started a micro-brewery and called it Ringwood and it has flourished ever since. Fortyniner was one the first beers brewed and continues to this day. “Old Thumper” is their most famous and has made it to the US. I found the Fortyniner in a bottlo in Melbourne and I’m glad that I did. Marketed as a bitter – it definitely is – Fortyniner creeps up on you in a good way. This drop proves you don’t have to be slapped across the face like that Fisherman’s Friend featuring Gyton Grantley before UnderBelly for a beer to be good. The aftertaste emerged long after the swallow but was well worth waiting for. A definite sessioner. 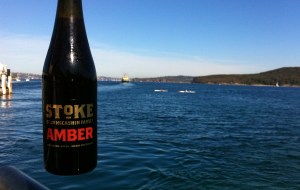 A Kiwi in Manly

Stoke Amber is the second of the three beers recently launched by McCashins Brewery that Back of the Ferry has tried. Deano has not disappointed. From the appearance, to the aroma, to the taste this is a winner. Another mild but deceptively tasty beer. Very keen to get to Nelson and visit McCashins and get into some of this on tap.