This BotF correspondent again had the opportunity to visit Melbourne, which is always a pleasure (well, recreationally at least). On this particular evening, I copped a tip from illiards and visited BieroBar (@bierobar). Now illiards was on the money and if you are in Melbourne, Bierobar’s worth the time to visit – but I had an appointment elsewhere. 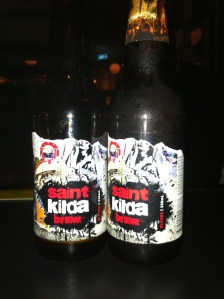 The Middle Park Hotel (@MiddleParkHotel), 102 Canterbury Road, Middle Park was where I was going to meet Jamie Dunn, the co-founder of Some Saint Kilda Guys Pty Ltd, who are the brewers of Saint Kilda Brew. The Middle Park Hotel is one of over 80 bars in Melbourne that stocks Saint Kilda Brew, and is yet another cracking Melbourne pub. It definitely deserves a return vist (if not for better photos) to sample more of the food, which ranges from $12 counters to quite serious foodie fare (fricassee of calves liver and sweetbreads anyone? A wonderful bar area with apparently 45 taps goes for ever and would accomodate the biggest crowd. 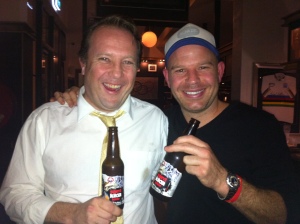 Tonight we weren’t drinking off the tap, as the only way you can drink Saint Kilda Brew is from a stubbie, which would have been delivered in a 1970’s Bedford van that is the Facebook profile photo that is Saint Kilda Brew’s presence in the interweb world. The boys keep it very local and are an integral part of the St. Kilda scene and its surrounds. For example, many of the stubbies carried artwork from local artists that were shown at the St. Kilda Fest. You won’t find this beer in Sydney. The vibe is social and the Brew is extremely easy to drink. Jamie described the session he and his co-founder had with the Sydney brewer that makes the Brew, as they slowly worked their way through iterations until they found the beer that they wanted to drink. What you have is a blonde style beer with a decent bite that’s not overpowering. 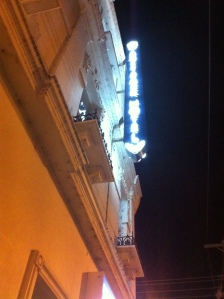 When you drink with Jamie, you soon realise that Saint Kida Brew will not be the only offering – there’s plenty of ideas buzzing in his noggin. The boys are working on a Radler and a Cider – both of which will be named in ways that will resonate and/or amuse with locals and anyone with a sense of humour. Expect releases soon, and BotF will be there-abouts. You make ’em Jamie, we’ll drink ’em and great to meet you.

By the way, who was St. Kilda? Actually no-one. There is no Saint whose name was Kilda. There is a Scottish archipelago that is no longer inhabited called Saint Kilda – but that is because some blokes couldn’t pronounce a Scandinavian phrase for “sweet wellwater” (that’s the best theory I’ve seen).