The Scots aren’t having a great run in sport at the moment. Their Rugby team regularly competes with Italy for the wooden spoon in the 6 Nations and their once proud football team hasn’t qualified for a major tournemant for some time. Their brewers, however, are waving the Scottish Flag proudly and are delivering some of the finest drops around. A number of brewers hve emerged in the last 3 decades and they’ve all been good. Brewdog has hogged the headlines with their extreme beers, but there are others doing wonderful things.

Harviestoun is a brewery founded in 1985. Its 3 beers are currently on special in the Vintage Cellars chain of bottleshops and they are well worth trying. Schiehallion is an awesome pilsner which has so much hoppy flavour it is more like a pale ale, but its pale colour definitely marks as a pilsner. The unusual name comes from a well known Scottish mountain. It is as much fun to say as the county in which the brewey is located – Clackmannanshire aka“The Wee County”. 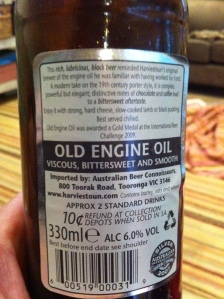 The second drop tried was the intriguingly named “Old Engine Oil”. The website tells the story – the brewer worked with cars – and he felt the beer had a similar consistency to motor oil. That’s vaguely off-putting, but this is a sensational Porter – one of the best beers I’ve ever drunk. You’ve got to love a label that proudly describes itself as viscous. It is thick, but it is velvety smooth and the mouth feel is quite unique but extremely pleasant. Plenty of depth to the taste, chocolate but solid long-lasting bitterness as well. I’ll be snaffling this again for sure.