A Sunday night in Manly is normally the preserve of backpackers trying to get into the Shore Club, but on this particular Sunday evening the Old Manly Boatshed was the go. Snaketide were flexing their muscles for their friends and they delivered in spades for those that made. BotF, a sometime member of Snaketide, was front and centre and can confidently say that Snaketide are keepers and will go on to bigger things.

On the way down to the gig, BotF fortified himself with an unusual drop – Innis & Gunn Oak Aged Beer. This was a meaty drop from a brewery in Edinburgh. Innis & Gunn’s website gives all the details about how this is one of a kind – knock yourself out. There’s no doubt it is distinctive. This is Trappist in its richness. A very sweet, almost cloying aftertaste follows the reasonably bittered first mouthful. The bad photo shows the amount of sediment in the bottle. Unfortunately I couldn’t pour it in a glass to show the fogginess – but this is a thick beer. Lots of flavour – almost too much. When I had a Pure Blonde nex, it seemed like water compared to the complexity of the Innis & Gunn.

Onto Snaketide. This was a free gig and the punters lapped it up. The line-up and sound is as tight as a drum, but dangerous and dirty. Myles has perfected the art of a front man and there was plenty of comparisons being bandied around. (Gallagher, Morrison, Albarn, Jagger). But a great front man needs a good foundation and Muzz, Tarants, Ken and Ben provide that in spades. The boys simply rocked the joint. The originals are better than the covers (I’m hoping no-one knows that “First Date” is a cover), but God Save the Queen should remain an integral part of the set. The audience fired up eventually and the dancing going on was frenzied.

Snaketide came of age tonight. There were punters that hadn’t heard them that were instant converts and the reaction to the two sets was testament to this.

They rock and BotF will give advance notice of the next gig. 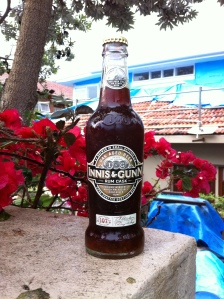