It’s been fun reading illiards’ missives from Europe and followers of Back of the Ferry’s untappd account will be envious of his exposure to a bevy of European uniques. But life goes on on the Northern Beaches and one of our brewers has released a new beer to make even better. 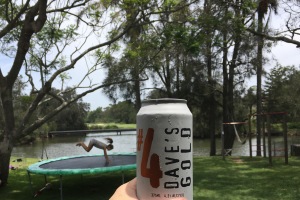 Dad & Dave’s Brewing kicked off in 2011. In 2017, they’ll join the ranks of Brookvale brewers when they open their own site. They are providing plenty of updates via their instagram account. They keep it simple with their beers – naming them #1, #2 etc. I’ve been partial to their #1 Pale Ale for awhile, but am delighted with their latest offering.

Dave’s Gold is a terrific golden ale, which is a perfect beer for summer on the Northern Beaches. Crisp, with the right amount of edge – you could sit on this for three sessions of a test easy. 4.2% and 25IBUs – it’s as easy going and amiable as Nathan Lyon. Better still – it is in cans and (take note everyone) the cans are 375mls in size. Well done Dad and Dave – just get this into the Mr Liquor fridges at CQ.