Oahu is fun. It’s many things, but I liked that you had a souped up version of the Goldie in Waikiki, you could get a good slab of Americana and you are on a tropical island. And if you are vaguely interested in surfing then the North Shore will keep you amused for days.

It is also a well populated place with many people and places that don’t really cater for the tourists. If you look hard enough there are plenty of cool places to drink where the locals drink and if you’ve got wheels, here’s a few to check out. 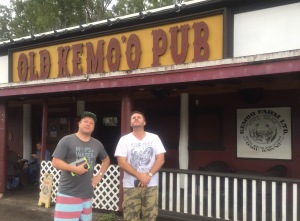 Outside shot as impenetrable darkness inside

If you drive from Honolulu to the North Shore, you have to through the towns of Mililani and Wahiawa. These are locals’ towns and probably sprang up to support the nearby military facilities. 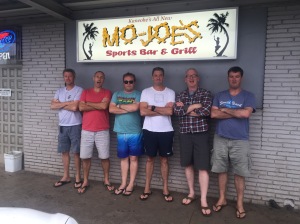 We had plenty of fun at the relatively new Taps & Apps, which is in Mililani just on the Eastern side of the H2. Yes, it’s in a shopping centre, but once indoors you are in agood Ol’
Sports Bar with 36 taps. The “Apps” stands for appetizers and there’s a few unique dishes influenced by the Mauritian chef. They are doing a little brewing as well – and have the growlers ready. Illiards and I celebrated our 3200th @UnTappd unique here.

If Taps & Apps are new, then the Old Kemo’o Pub is old. The site (in the next town of Wahiawa) has been serving brews since 1909. Their website describes the history, but if you want a slice of Blues Brothers and night time during the day, stick your head in. It’s another sports bar with a large stage at one end that really should be shielded with chicken wire. At 1pm you need to read the menu with a flashlight and the usual assortment of deep fried finger food is available. About 16 taps and definitely worth a longer visit next time.

On another day, we convinced our mates to visit a new brewery we discovered in the town of Kaneohe, which is on the central east coast of Oahu. It is a stunning drive from the North Shore, but Kaneohe itself isn’t a destination for many tourists. We were a little early for the brewery opening but we fortuitously found another sports bar. Mo-Joe’s is a vignette of what I’d imagine the Deep South of the US to be. We pushed open the tinted door and confidently walked in. Whilst the bar didn’t quite stop dead in its tracks, many patrons looked quizzically at the 7 Aussies that took a chair. I don’t think 7 strangers had walked into this bar in a month, let alone at once. Every pony-tailed, goateed, baseball cap wearing patron was very friendly and the owner sidled up very fast. He hadn’t heard of the brewery we were going to, and was keen for us to try his steak. We would have stayed longer, but the brewery was always going to be hit and run at best – so the sip was short and sweet. Next time a decent session at Mo-Joes. 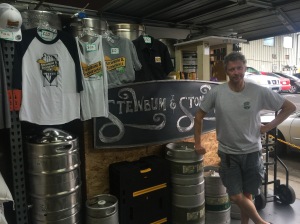 Stewbum and Stonewall is like so many little craft breweries (very much like HopDog). A micro operation working out of a little industrial estate. These guys are really new and crowdsourced some of their funding. The brewery is named after the nicknames of the founders’ fathers. Limited opening hours, and small capacity, but the beer and the merch are top quality. Lulu’s in Waikiki is stocking them if you can’t get to Kaneohe. Plenty of fellows were coming in for growler fills, so they’re making their mark. They tipped us to Lanikai, which we’ve left on the table for the next visit.

The Wheat, the IPA and the Pale