As I’ve mentioned in recent posts, there are some fabulous craft beer venues in Beijing. They balance of the challenge of finding them (Beijing is a challenging city) with a great pay-off if you persist. Slow Boat Brewery’s tap room is a great example. I’m not sure who was first, but Slow Boat and Great Leap are pioneers in Beijing and both tip their hat to the Imperial city’s history whilst introducing new experiences.

Slow Boat brew in the northern outskirts of Beijing in a suburb no tourist would get to (however I noticed a subway stop is planned for there). The taproom is relatively central and with a good map, it’s easy to find. They’ve chosen an obscure alley and it seems to be very under wraps, but persevere and the reward is exceptional. This is classic old school Beijing meeting new world beer. 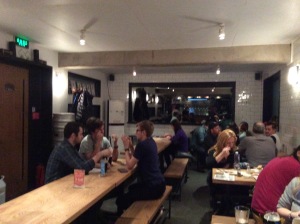 Once inside, you could be in the coolest place anywhere. White tiled walls give the bar a really clean stark look. The star is the tap wall of quality. It reminds me of the first tap wall I saw in Santa Monica. 20(?) taps with all bases covered. 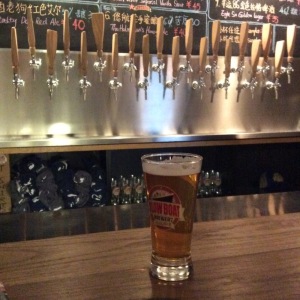 Dinner was planned for later, but I regret not trying their burgers, which have won awards. I opted for a simple plate of pickles, which were fabulous. Hats off to the batman from Somerset who loved talking about the different beers. Generous with tastes as well. Some stunning beers here. This is what good beer is all about. Happy campers enjoying a passion served by passionate people.

Find this and you are almost there